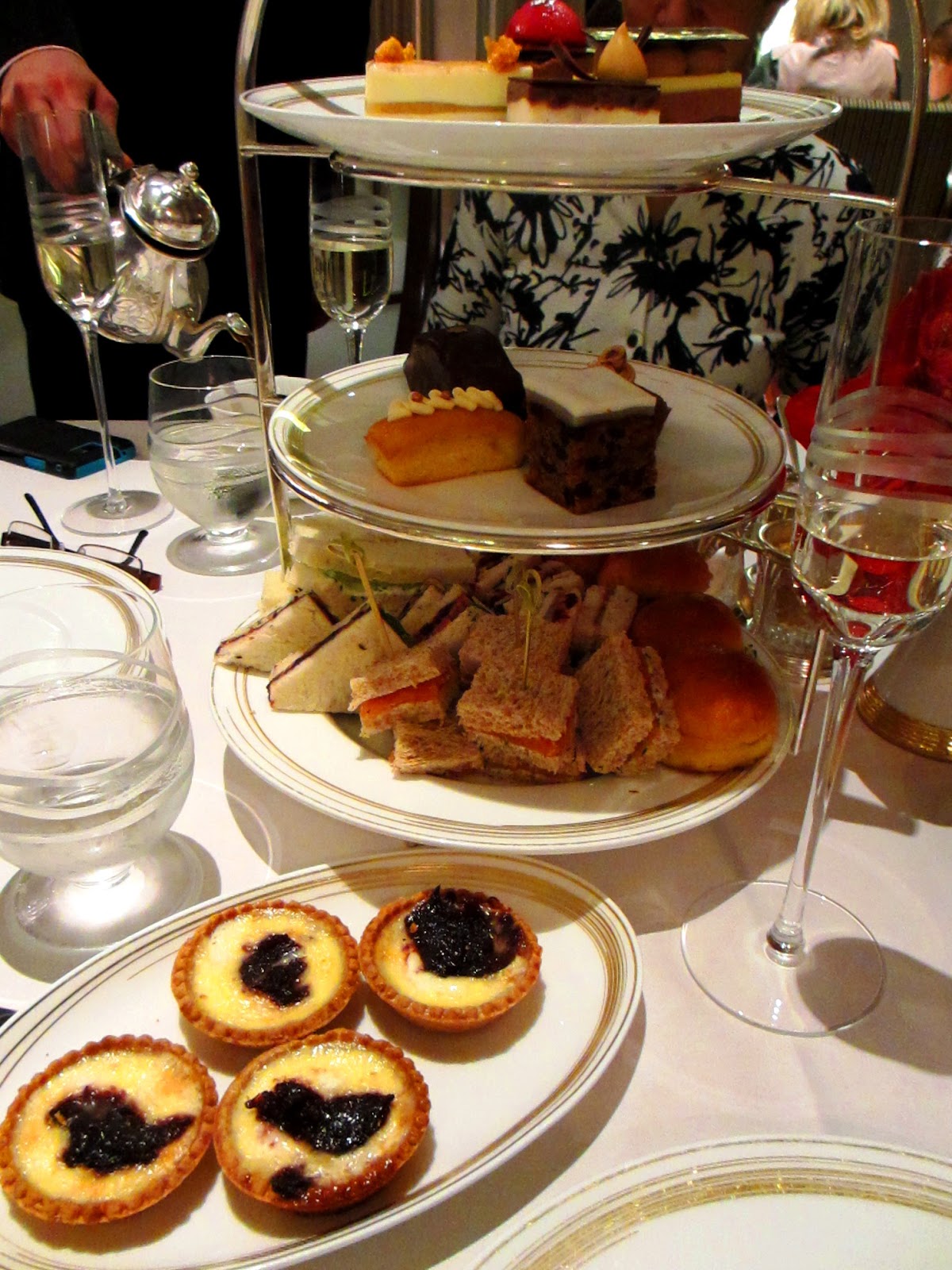 Britain is full of institutions, many to be proud of. Monty Python, suits from Saville Row, the NHS, the BBC, Speaker’s corner, and Wimbledon to name a few. Eating and drinking are also a major part of the British make-up, and we don’t fare too badly when it comes to institutions of the culinary kind – full English breakfasts, gin and tonic, fish and chips, Pimms, Sunday roasts, strawberries and cream. The British are also well known the world over for their love of tea. The habit of taking tea in the afternoon is now a tradition so strong that all the top hotels in London offer an ‘afternoon tea’ dining experience, priding themselves on expertly sourced preserves and the quality of their tea range, with stiff competition amongst the rivals.


It was Matt’s mum’s birthday this weekend and
for a gift, he treated both his parents to join us for afternoon tea at The Lanesborough, Hyde Park corner. Many of the hotels in London claim their tea
experience to be the best. However, it’s The Lanesborough that has won the UK Tea Council Award of excellence every year between 2009-2012 and they are keen
to highlight this fact on the very first page of their menu, and rightly so. Afternoon
tea is served daily in the hotel’s Michelin starred conservatory restaurant, Apsleys – grand in its Venetian splendour and fitting for the experience.

We were seated at a table next to the pianist – an older gentleman dressed in his finery, playing both soothing pieces of classical alongside more jaunty Christmas melodies. From the menu on offer, Matt opted for The Lanesborough Tea (£40) which includes your preferred choice of tea (in this case Assam), a selection of finger sandwiches, pastries, toasted teacakes and homemade scones, served with homemade fruit preserves and clotted Devonshire cream.  Matt’s parents and I opted for The Belgravia Tea (£50) including the full afternoon tea selection as above, with the addition of fresh strawberries and cream and a glass of champagne. I selected the Lanesborough afternoon blend and those chosen by the rest of the party were the slightly stronger Lanesborough morning blend, and Earl Grey.

The teas were ceremoniously poured from silver pots of substance and strawberries were delivered at room temperature – exactly how they should be. We were each then presented with an amuse bouche of chocolate sponge topped with chocolate mousse, sitting atop a mango and banana puree with a festive sprinkling of gold leaf – very pleasant. Empty pots removed and the familiar three tiered stand of an afternoon tea was soon delivered, presenting us with the sandwiches, cakes and petit fours. The sandwiches could have been arranged a little neater, but stripped of their crusts and with soft bread, the flavours were appealing and traditional with the inclusion of a couple of Christmas guest spots: smoked salmon with cream cheese on brown; egg mayonnaise and cress in delightful cloud like brioche buns, turkey and cranberry with red cabbage on white, cucumber, and Stilton  The middle tier housed the cakes: a square of dense and sweet Christmas cake, a lemon sponge, a wonderfully rich chocolate cake, and a hazelnut based sponge. The top tier of petit fours included a spiced cheesecake, and raspberry and chocolate based bites. Alongside this tower of delights were four warm caramelised red onion and cheese tarts – a classic combination of flavours that expectedly worked well, encased in crispy light pastry. 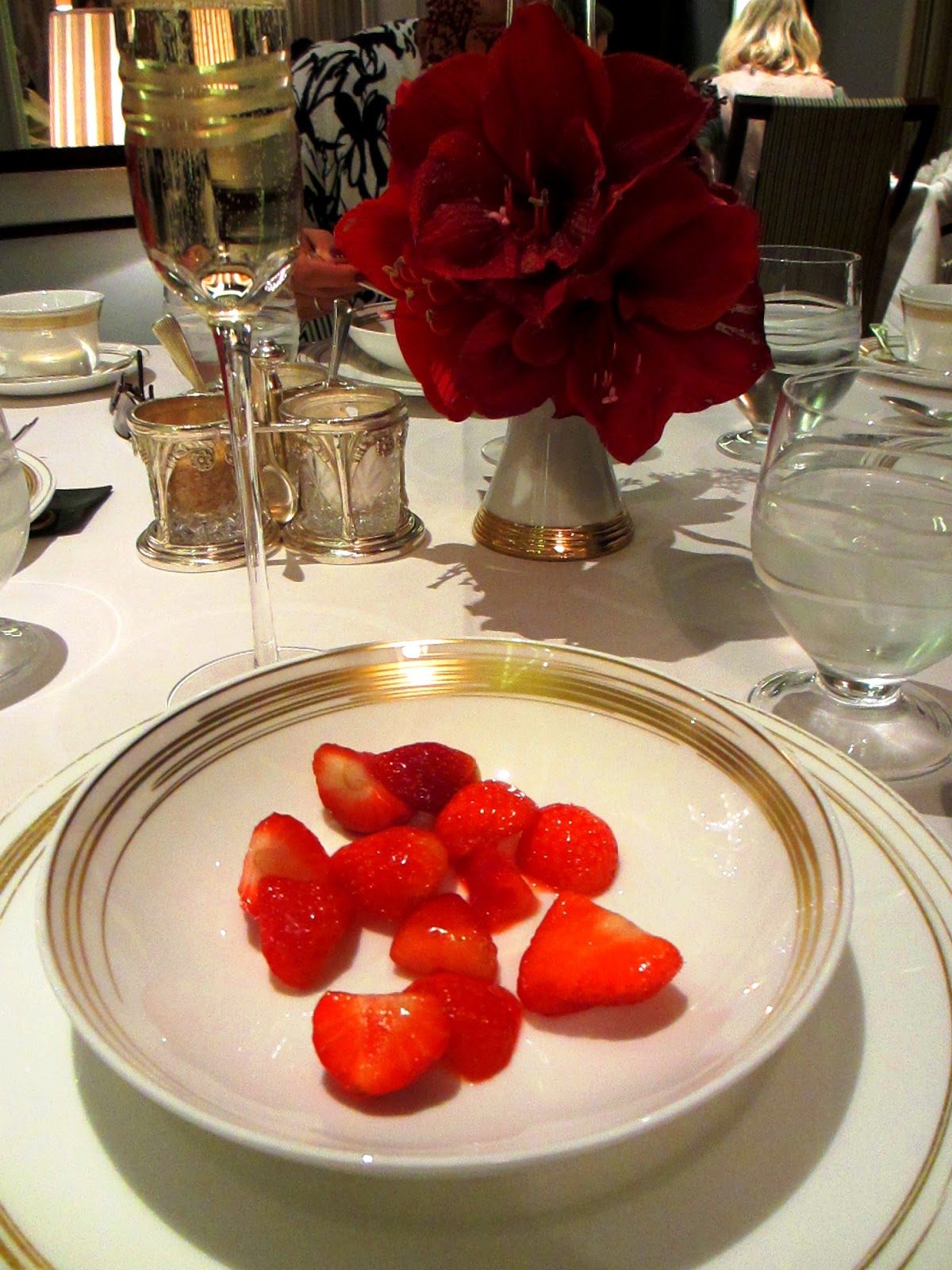 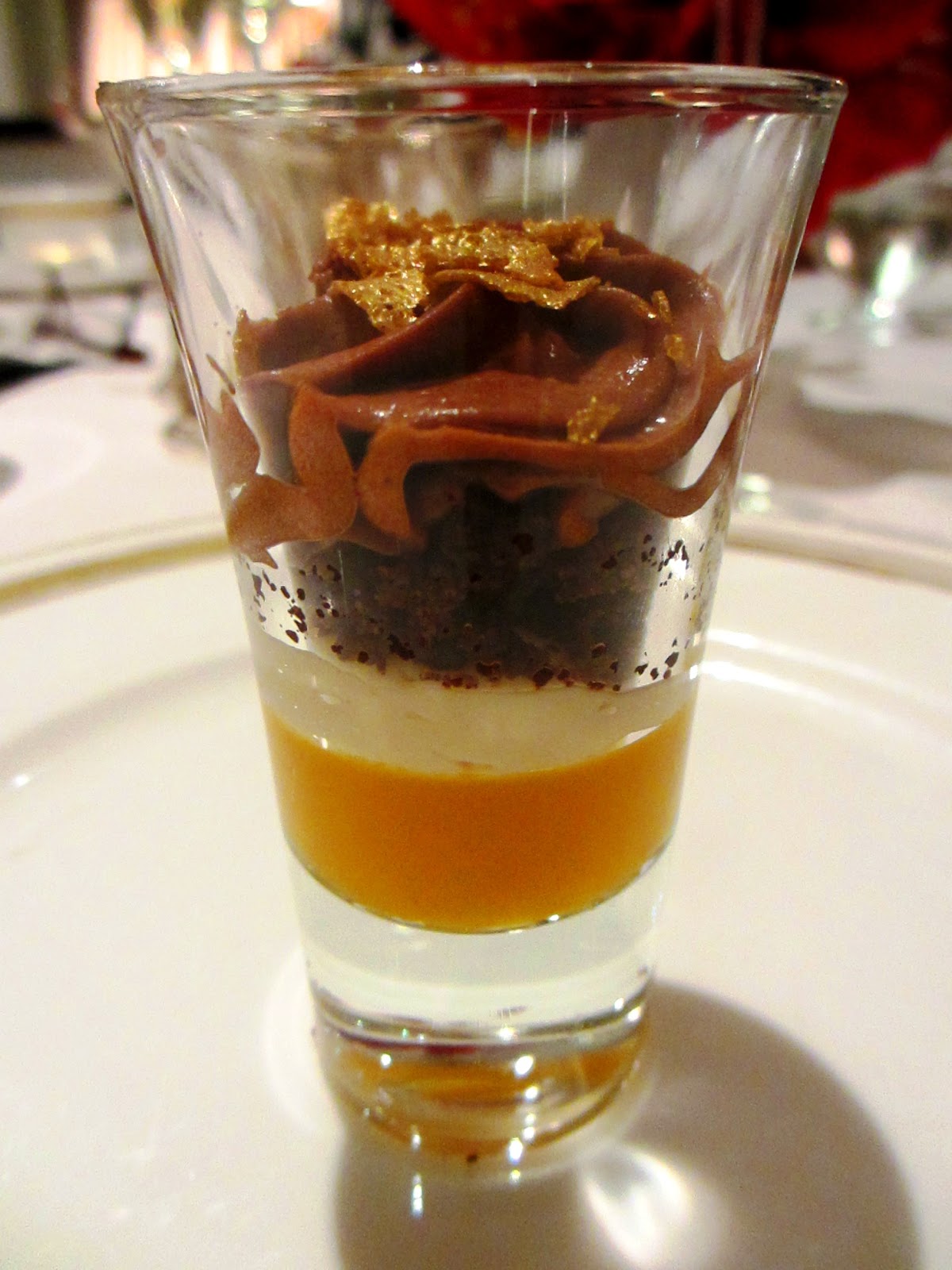 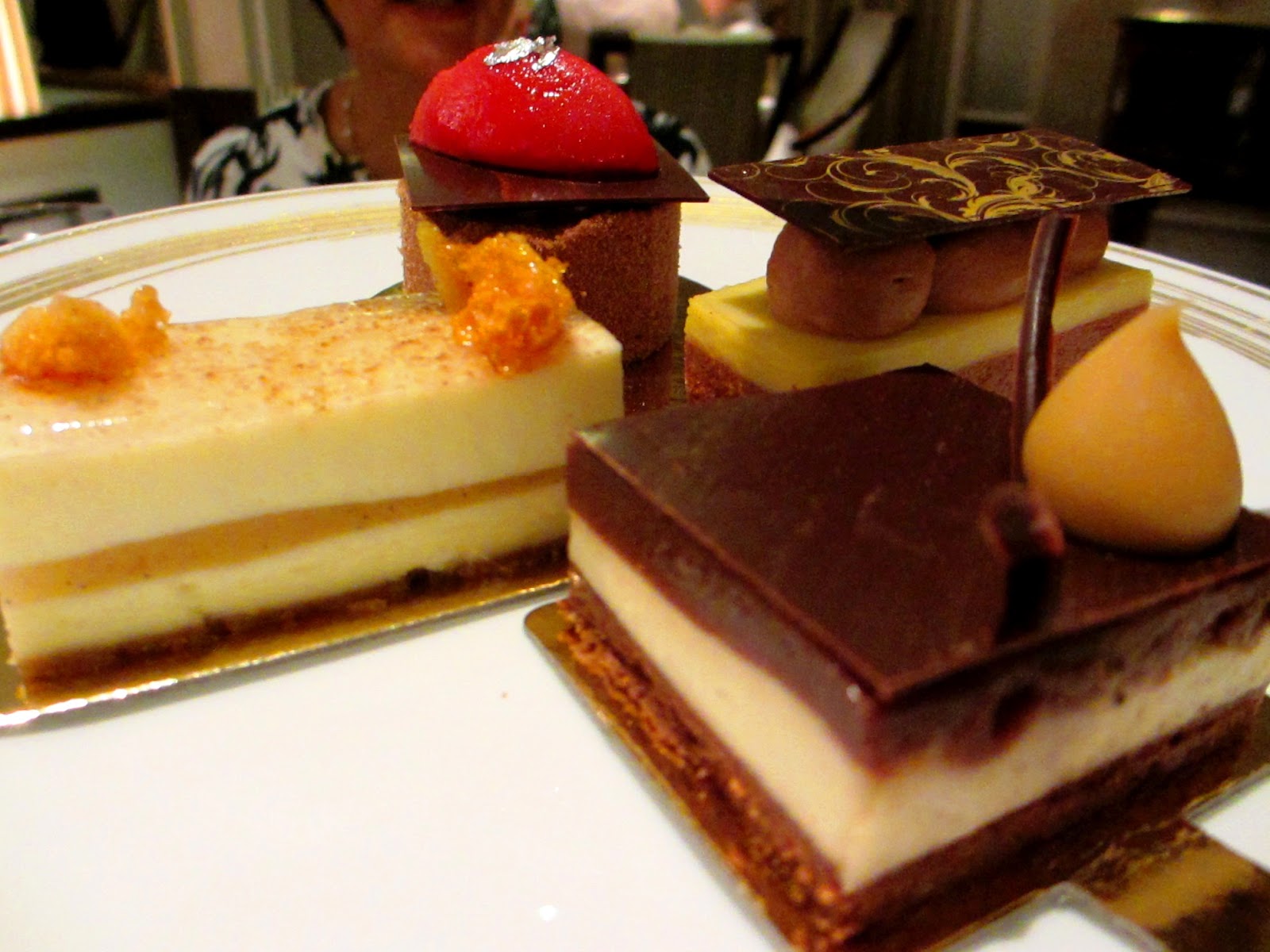 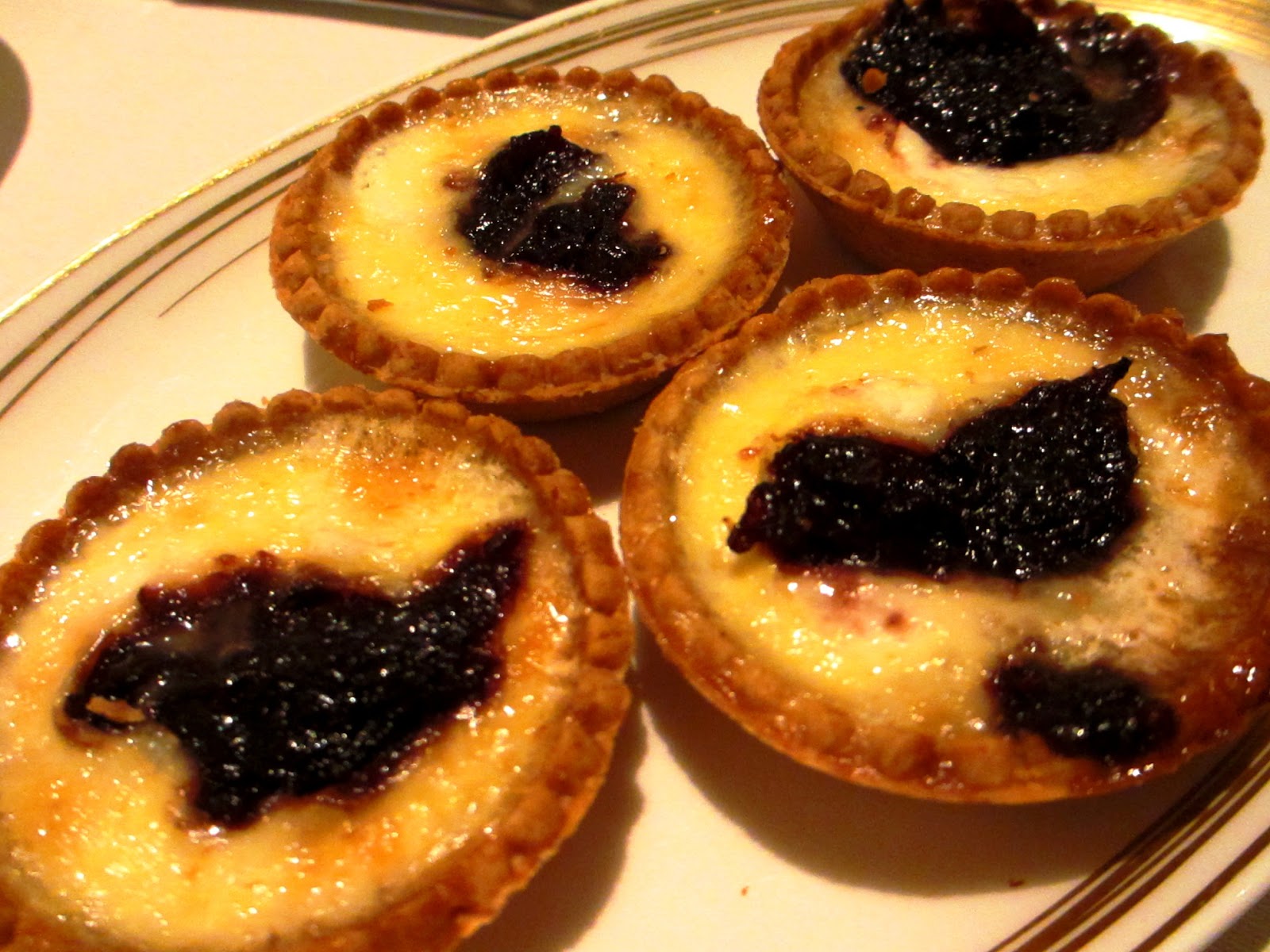 With tea regularly topped up and sandwiches joyfully replenished at request (Matt is first in line at the Stilton fan club), room for more was rapidly waning. But more there was. A plate of dainty mince pies with a dusting of icing sugar; toasted spiced tea cakes; and small warm scones sporting golden glazed marmalade hats. To accompany this, pots of strawberry jam, lemon curd and Devonshire cream. Aromas of cinnamon, ginger and mixed spice were mingling with every mouthful from the mince pie fillings and tea cakes. The scones were fresh, light and soft – so delightful in their form that we asked for a few more and were happily obliged. As part of this festive version of the traditional afternoon tea (available until 1st Jan), our final consumable came in the form of a shot glass housing a warm and spicy mulled wine. A glorious round-off to the fare, and capable of warming the very marrow in your bones. 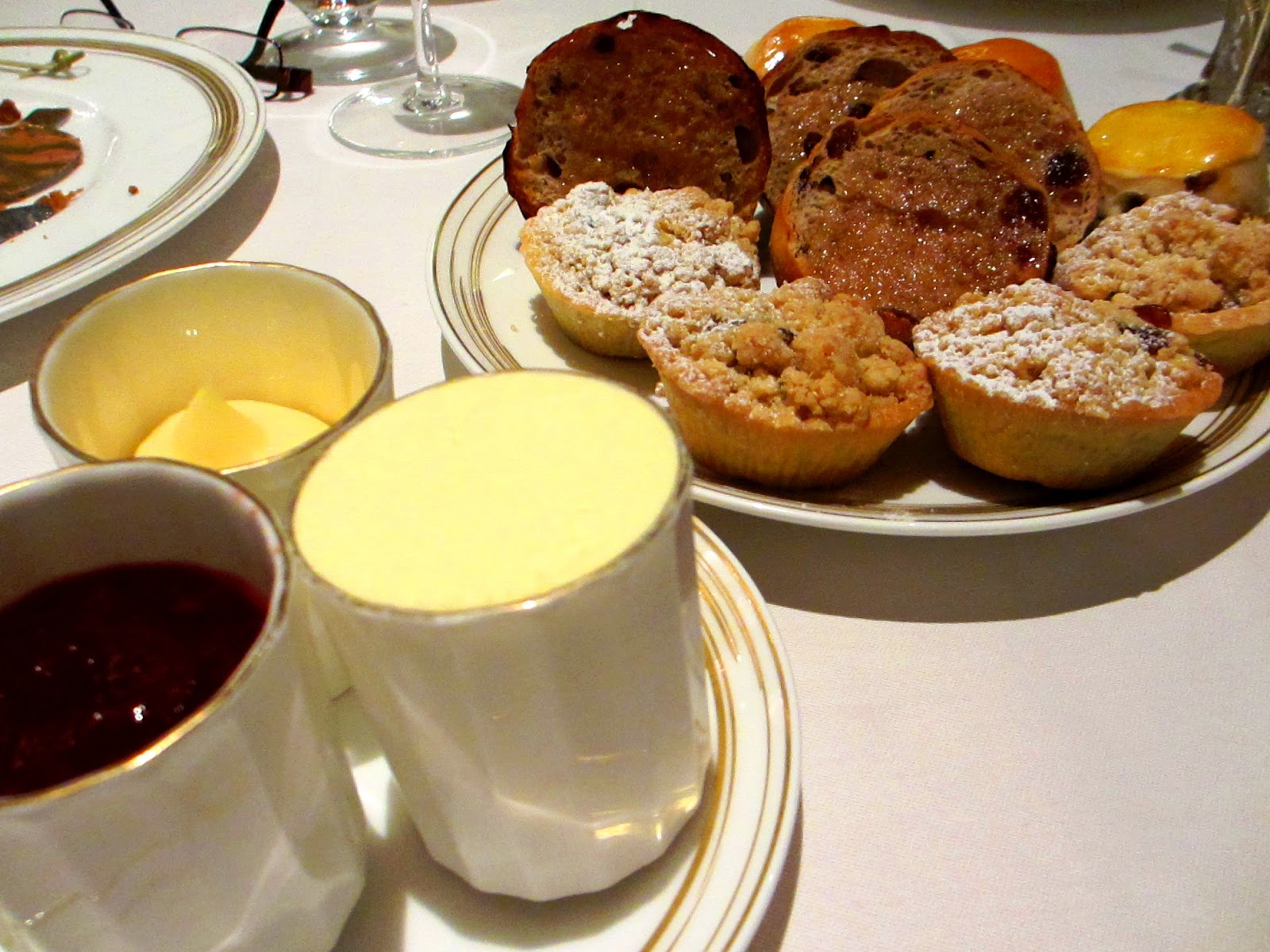 The simultaneous consumption of tea and champagne (and alongside mulled wine in this instance) may sound strange on paper. And to be honest, it is – in no other environment would this combination ever be found. But it works. Whilst champagne is not by any means a necessity in order to enjoy the experience of a quality afternoon tea, at this time of year alcohol seems to involve itself in every ingredient, outing and social interaction, so you may as well resign to this fact and enjoy it. Regardless, the opulent setting of Apsleys along with the quality of what was on offer made the experience most pleasurable and I do believe the birthday girl was positively chuffed with her gift. Good work Matt. 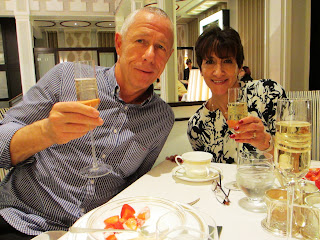