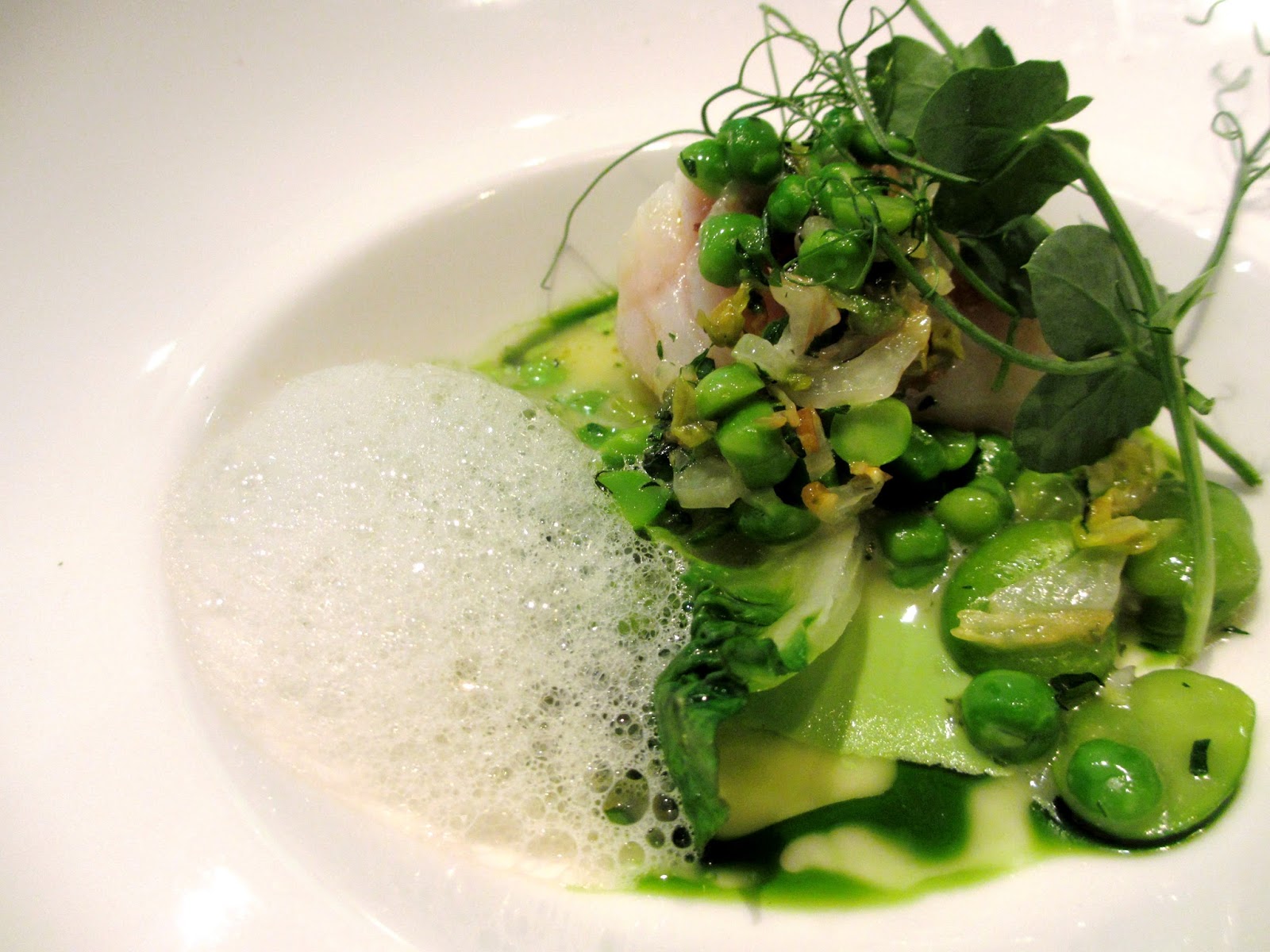 I recently treated my parents to dinner at The Ritz for an anniversary gift, and as the day approached my mother divulged, ‘we’re going to have to get your dad a new suit’. I had almost forgotten the strict code of attire at The Ritz – men must wear a jacket with tie and jeans are strictly prohibited. The opulence of the setting complete with a fully tuxedo’d front of house is certainly fitting for such robe requests, and everyone doing their bit when it comes to making an effort lends itself to an even more heightened dining experience of exclusivity and luxury.

Whilst I’m sure dining at The Ritz is a very unique venture, it’s not really for me. I want to consume very good food without having to adhere to a dress dictatorship in order to do so. I recall my dining partner almost being refused entry to Hakkasan once due to his sport shoes, albeit very smart and pristine white ones with the addition of a blazer to boot – scandalous! My ideal location for a birthday treat (of which this meal was), would be an informal and relaxed restaurant with no pretenses serving Michelin quality food. And L’autre Pied in Marylebone achieves that in spades.

The kitchen is commandeered by head chef Andy McFadden and his seven course tasting menu was the agenda for the evening. On arrival we were seated by a very charming maitr’d who recommended a rather spectacular glass of Italian red, the name of which I failed to note. An amuse bouche began proceedings consisting of silk thin poppy seed pastry topped with cool, smooth and meaty chicken liver parfait and sprinkled with chopped olives. 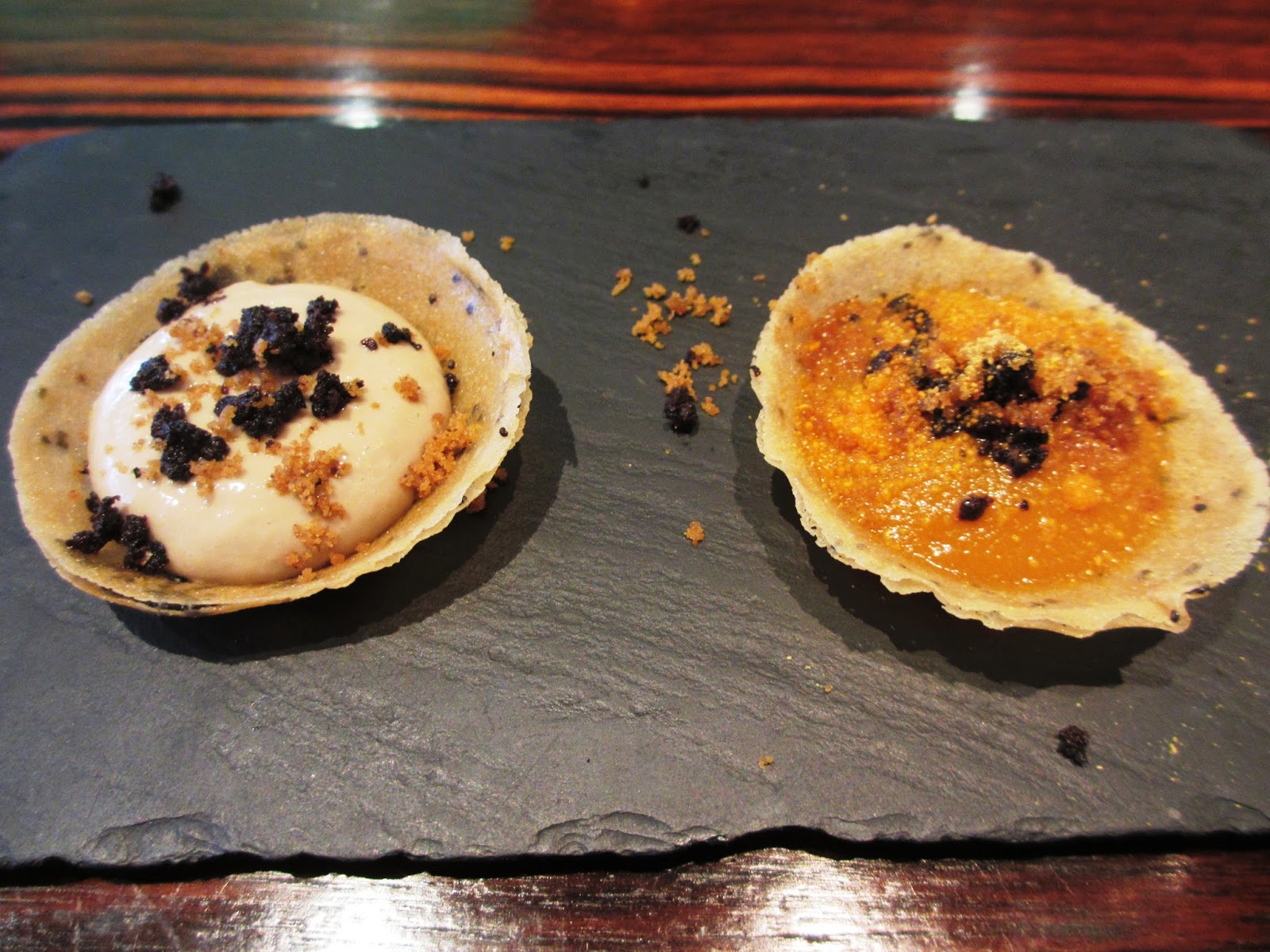 Culinary artistry and refined presentation stole the limelight at each course. The first involved compressed cucumber with frozen gazpacho, akin to incredibly flavoursome crushed ice alongside an intense flavour of cucumber and topped with black onion seeds. The dish sang the familiar notes of a typically Turkish sandwich comprising of sesame seed topped bread, cucumber, and salt from halloumi (in this case from the well seasoned gazpacho) – light and refreshing and quite the picture. 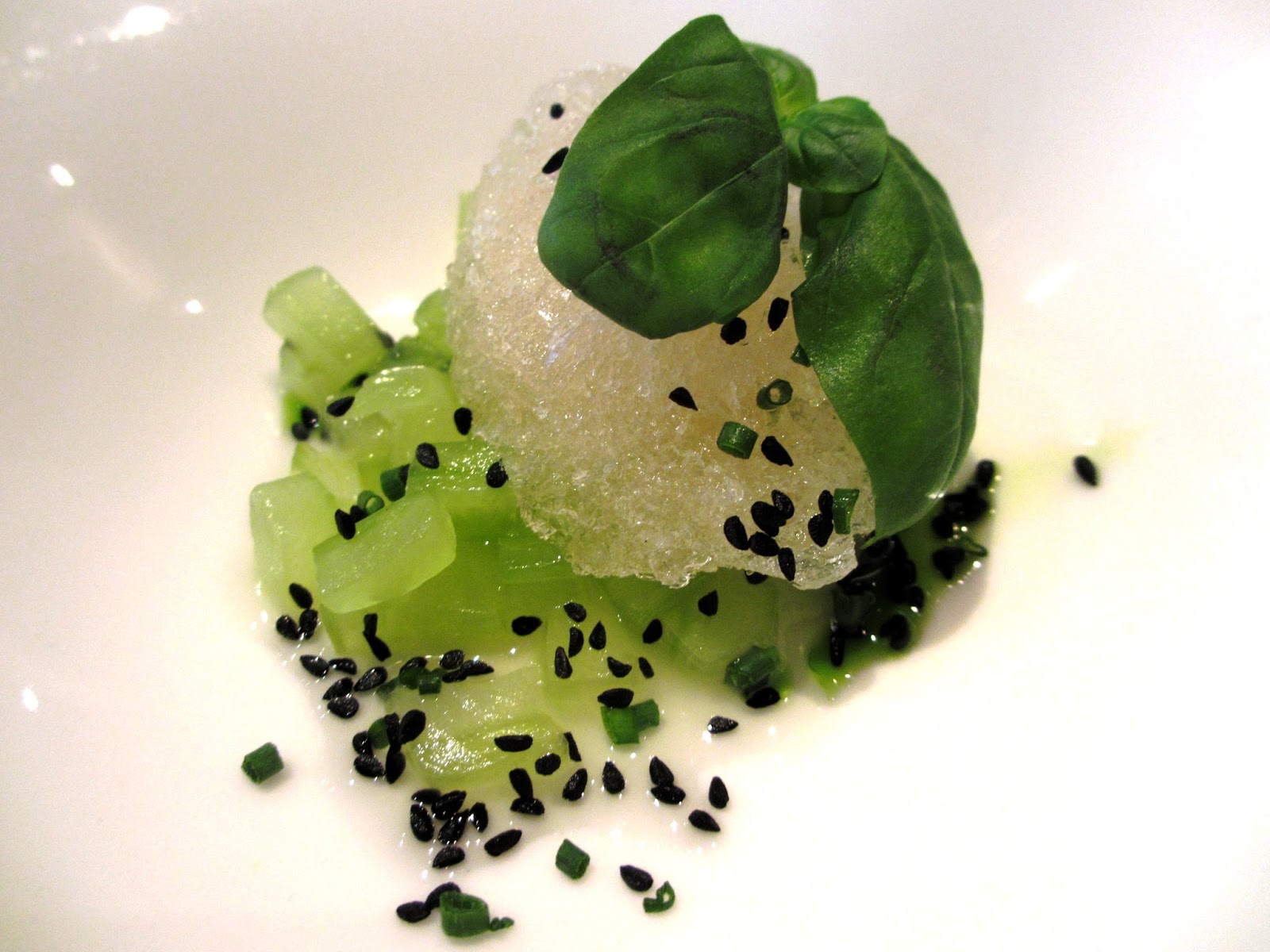 A salad of radishes with black quinoa, crème fraîche, fennel and dill followed. I was more than happy to let the mispronunciation from the waitress of quinoa as ‘kwin-owa’ (actually pronounced ‘keen-wah’) slide, as the plate itself was striking enough in its appearance to distract me, with the flavours and textures to match. Delicate, crisp and clean and with hard raw beads of the grain to provide interest between the teeth. 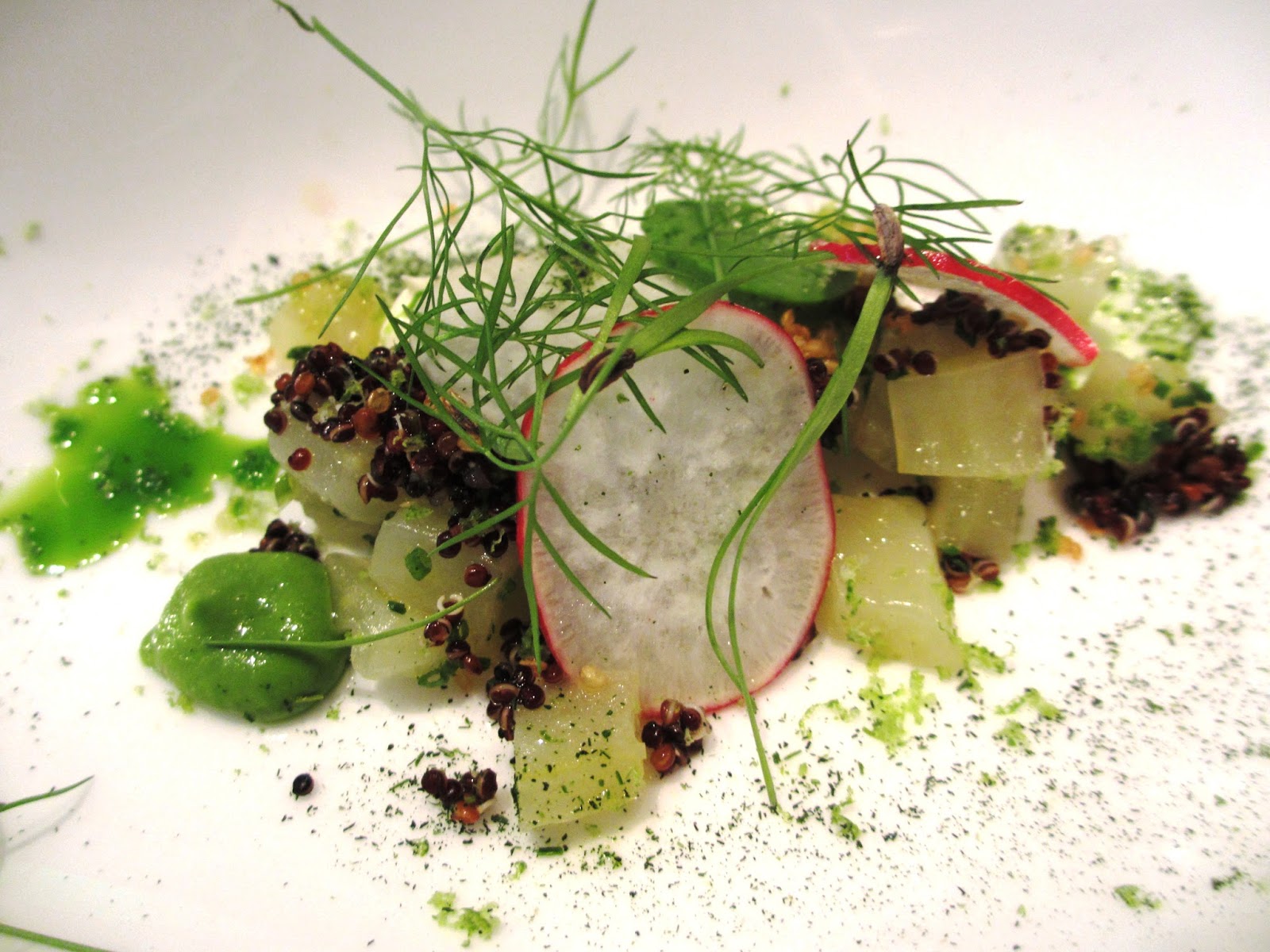 The third course continued with the theme of vegetables as the star attraction and with one of my favourites taking centre stage – beetroot. A generous wedge of it was served baked alongside a balsamic gel, a gratifyingly wobbly horseradish panna cotta, small and perfectly piped meringues dyed pink from beetroot juice with a sublimely satisfying texture when penetrated with the fork, and crunchy beetroot and balsamic crisps intense with the flavour from both; I particularly enjoyed the inclusion of techniques usually reserved for desserts in this dish. Course devoured and plate left like a scene from a Tarantino set, typical of the ruby red vegetable presence. 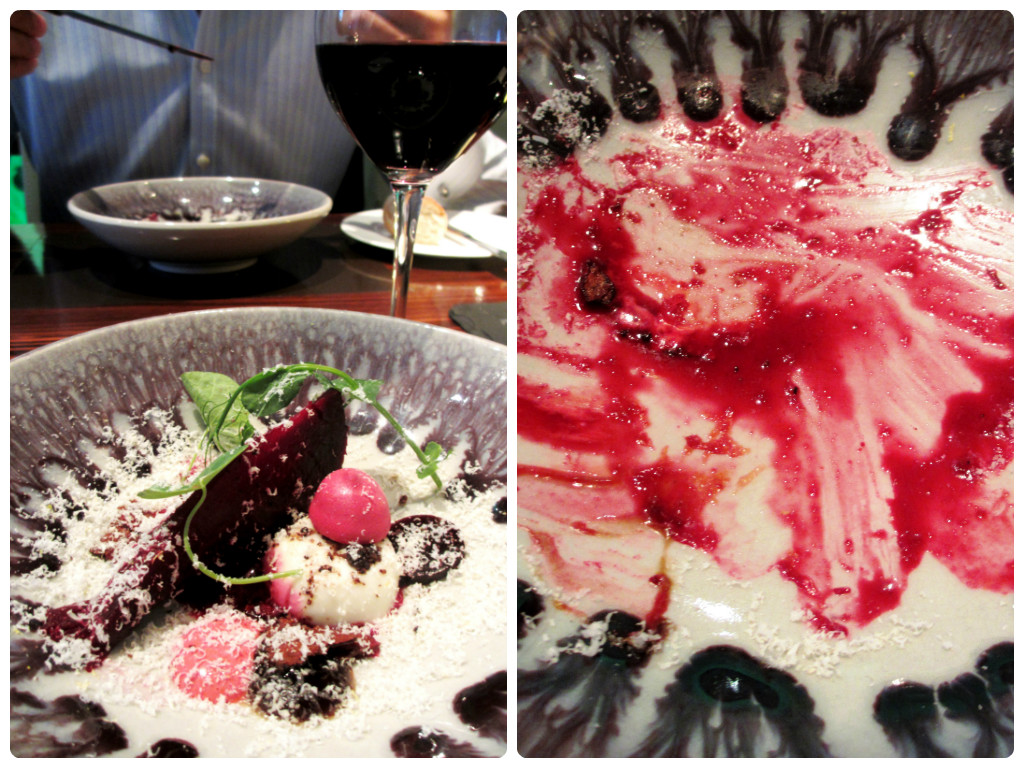 Fish was next to decorate our table in the form of poached pollock with gem lettuce, broad beans, peas and mint. This was my least favourite dish and I would go so far as saying it was disappointing. The fish was underseasoned and added little, if anything, to the plate. It was served alongside a foam of some sort which was also entirely lacking in any discernable flavour. The vegetables were the redeemers and topped with pea shoots – an arresting vibrant green, perfectly al dente and exceedingly fresh.

Red meat soon followed – slow cooked shoulder of roe deer with the flesh sporting slightly caramelised and toughened edges deep with flavour. Tea smoked prunes and baby carrots provided sweetness and the plate was dressed with a rich jus, carrot oil and a peanut crumble, although I was only able to detect little presence of the latter.  Soft and flaking meat characteristic of an eight hour low heat treatment. 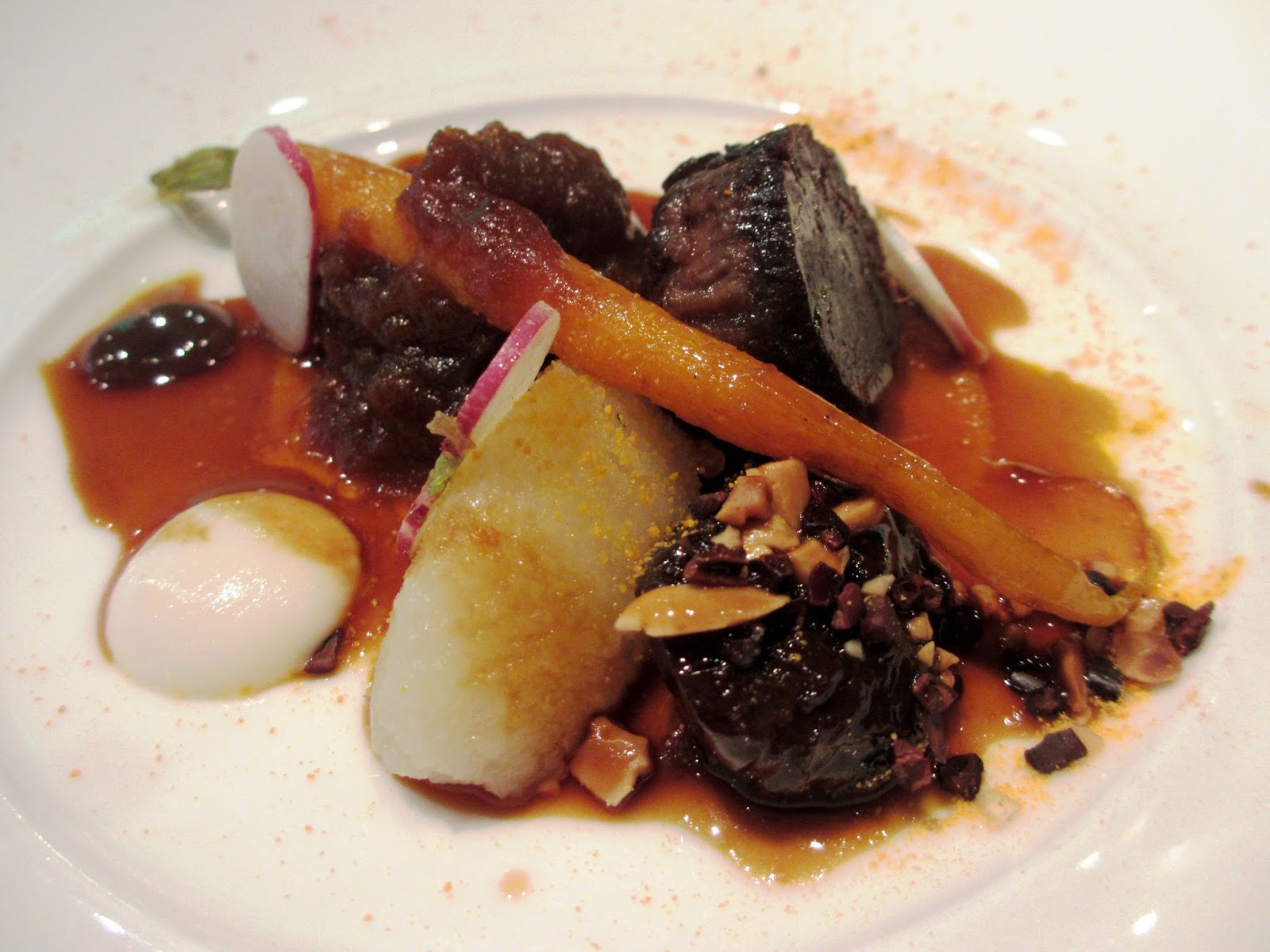 Onto the second stomach for desserts spanning two courses. To begin, an apple custard with honeycomb, sharp palate cleansing raspberry sorbet, speckled with pieces of rose water meringue (very similar in both flavour and texture to the nuggets of sin found in the tooth-achingly sweet Lucky Charms cereal), and topped with a sprinkling of toasted pistachio, the flavour of which I adore about as much as toasted sesame – almost certainly due to my part-Turkish heritage. A quite wonderful and well thought out dessert. 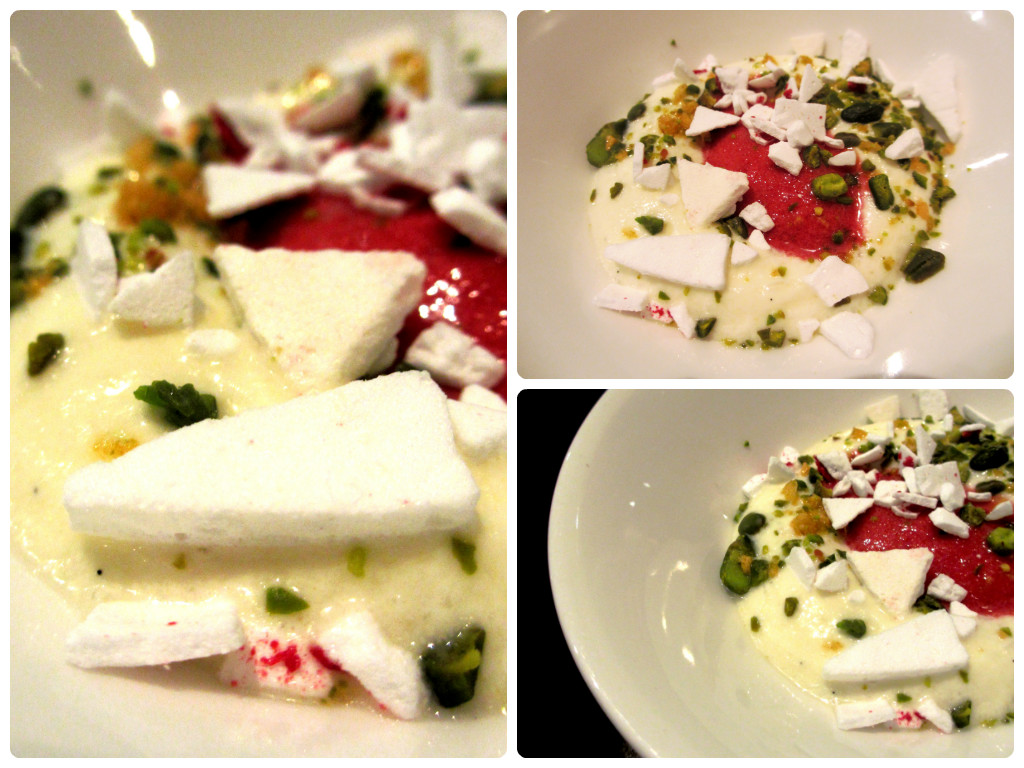 French Gariguette strawberries served at room temperature (a cold fridge sucks out the flavour from a strawberry) along with an exceedingly coconutty ice cream, yoghurt and passion fruit drew the very pleasing proceedings to a close. 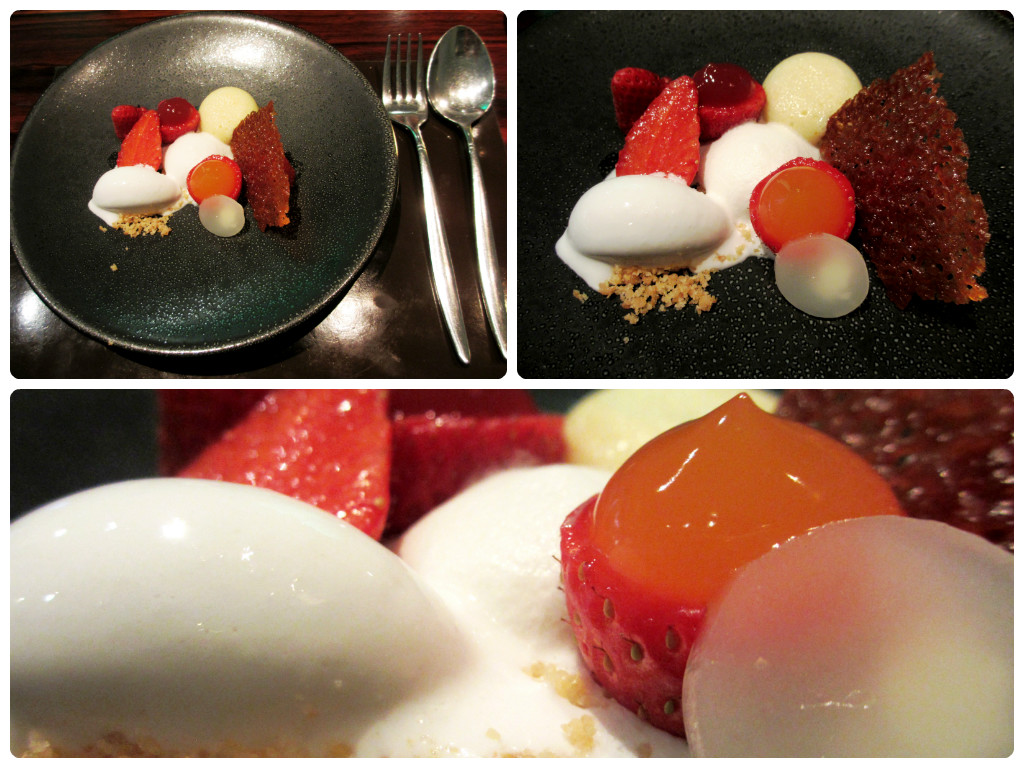 Service throughout was warm and attentive without being overbearing. Interiors are muted and casual, allowing the expertise and precise presentation demonstrated through the food to take centre stage. The lack of a trous normand before dessert or petit fours after was a little unexpected when compared to other Michelin tasting menus I’ve sampled, particularly the sister restaurant Pied a Terre, where both were received. But L’autre Pied, whilst still maintaining highly commendable standards, is the slightly more accessible of the two with good value set menus for the quality received, and a wine list with prices that don’t cause a pained wince on perusal.

On the note of value, it’s certainly worth mentioning that this particular meal was part of a deal sold on Groupon – 50% off a seven course tasting menu for two. Or two for the price of one, in other words. I thought it highly uncharacteristic of a Michelin venue to lend itself to Groupon, whilst also offering such significant discounts within the deal. But as far as I could tell, the menu was identical to full paying customers and we received the same service and experience as the diners around us. I in fact commend L’autre Pied for shunning the judgements of others and actively making their food accessible to more people – bravo.

With the full priced seven course tasting menu coming in at a very reasonable £62 per person, a visit is certainly more than worthwhile for a special occasion or a well deserved treat.