The only thing standing between me and a tantalising, cosmopolitan, six-course feast cooked and hosted by some of London’s finest supper club chefs on a brisk evening in late February, was the 1 hour and 45 minute journey on public transport to get to it.

Clapton may as well be as far as Manchester for those of us residing towards the bottom of the Northern Line, but with the promise of an East vs. West tasting menu for the press launch of the Flavour Expats Pop-up series at the other end, I needed little convincing to contend with a tube line change or three. 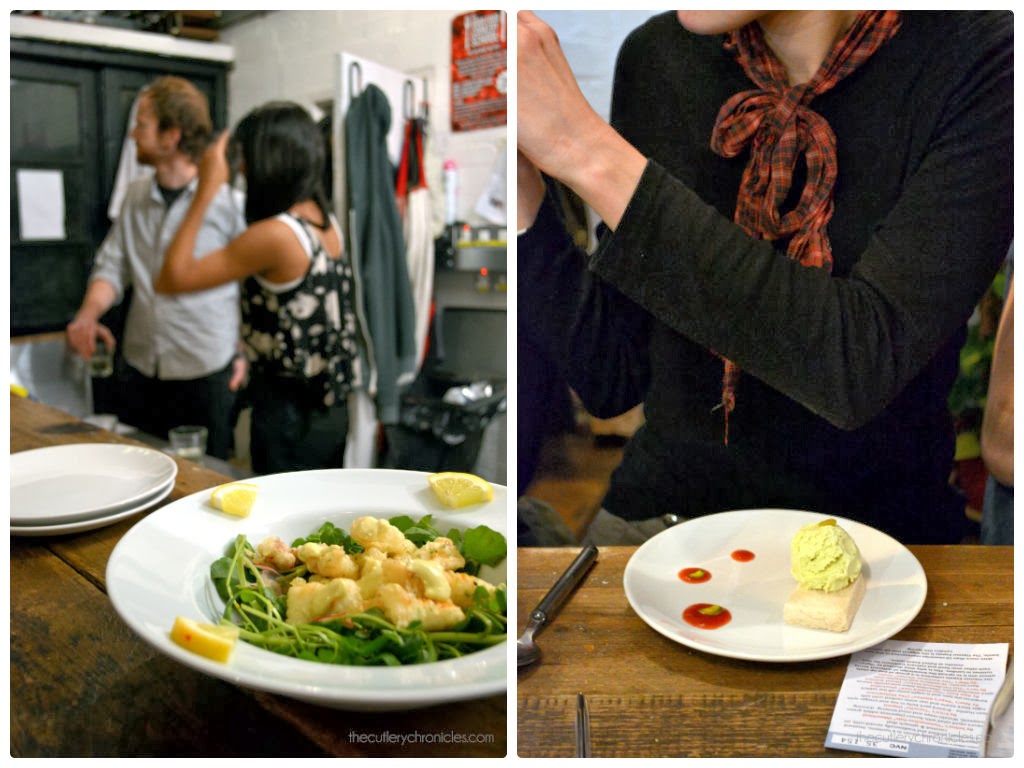 Rob and Fabio – the dynamic duo behind Italian/Spanish supper club stalwart Backdoor Kitchen – have collaborated with Edible Experiences (the food and drink experience booking platform) to bring together 14 chefs with culinary roots stretching across the globe in this East London-based pop-up project.

The premise is this: in the large airy space above iconic Hackney corner shop Palm2, a different pair of chefs (representing Team East and Team West) battle it out each night by serving up three courses from their home-country to a group of hungry patrons. Diners enjoy six dishes from two different cuisines in one evening and the series lasts for seven nights between 8th March and 12th April.

The press event menu revealed a snapshot of some of the food to be enjoyed over the series, with six of the participating chefs each cooking a single dish that evening. 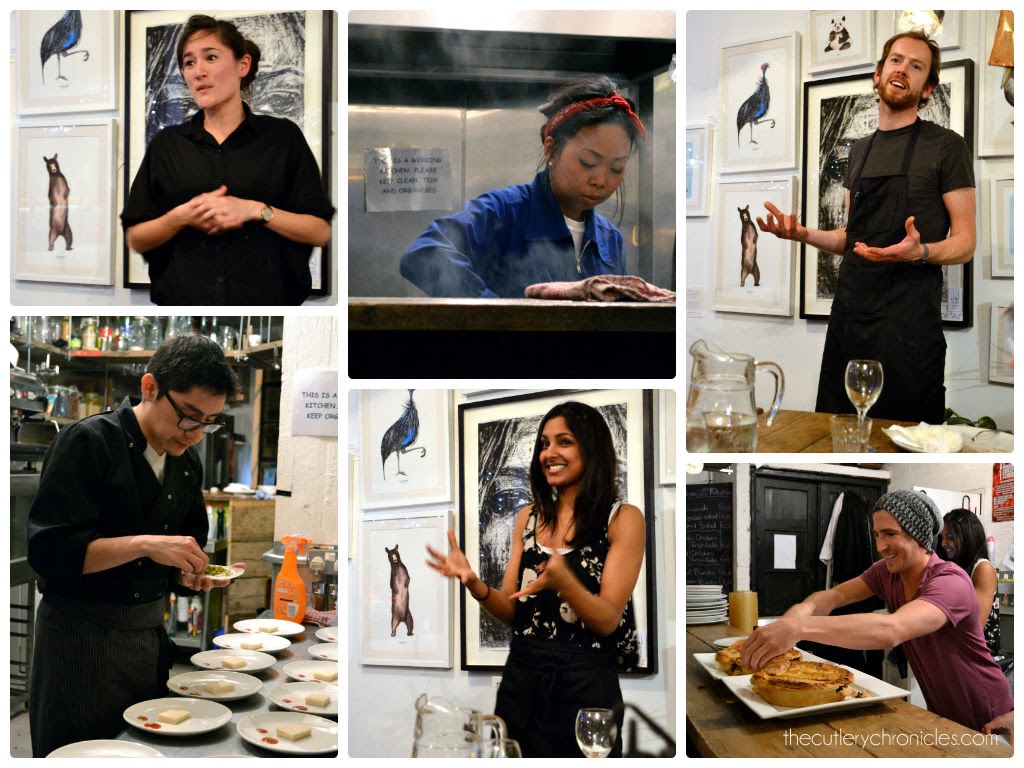 Mae’s mussels cooked in coconut milk with turmeric, leek and shrimp paste were hot and saucy and capable of blasting away even the most fuzzy of February colds; such were their addictive quality, my plate of shells soon spilled out onto a second. Pepe’s Kitchen – Mae’s supper club serving up traditional Filipino fare – waved the second flag hard for Team East.

Then there were individual plates of coconut and spinach dhal topped with a gathering of Mauritian vindaye poisson; tasty chunks of trevally cooked in a turmeric and mustard seed marinade and sporting a flourish of deep pink pickled onions. We had Selina from Taste Mauritius (aka Yummy Choo) to thank for a very pleasing third course and the final Team East entry for the evening. I’ve written some words in the past about Selina feeding me with great food at one of her Mauritian pop-ups and a dinner recently hosted in collaboration with Great British Chefs. 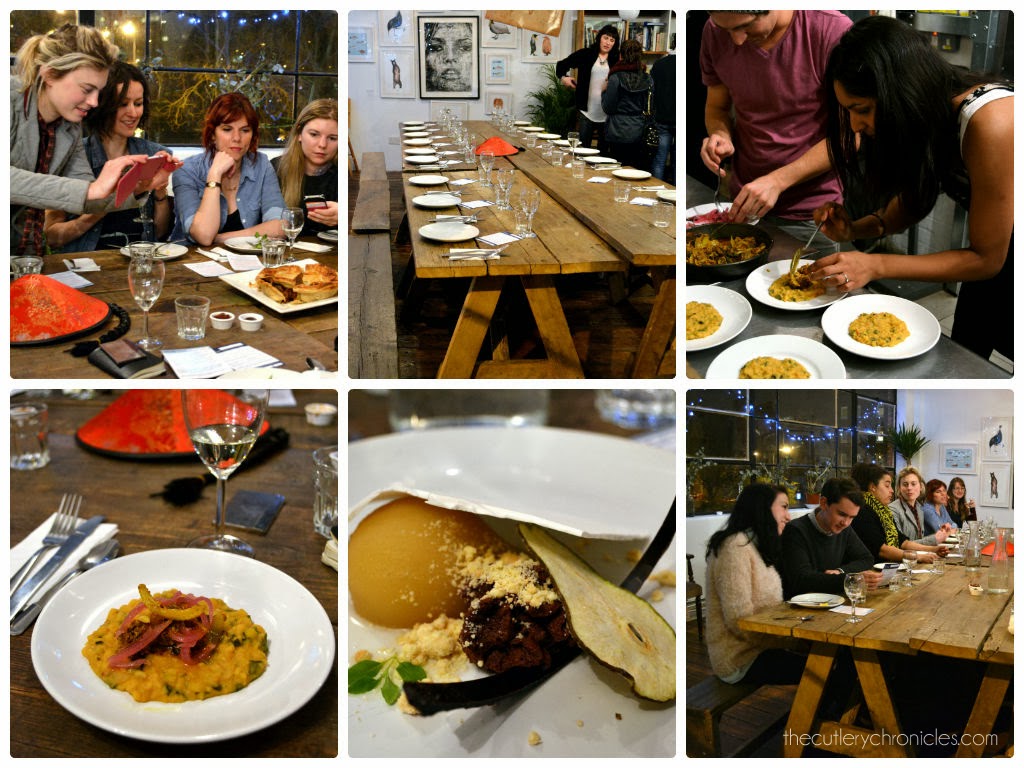 Now to the west, starting with Australia (which I suppose is as much west as it is east from this part of the globe). Alex – one half of the private catering and supper club duo at The Pickled Fork – had us diving head-first into two steaming-hot behemoths of kangaroo pie. Steak simmered for four hours in a mirepoix (the French term for a mix of chopped celery, onions and carrots – yes, Alex had to explain this to me) with Guinness, finished with Worcestershire sauce and topped with a flaky crust, the pies gave way to a whole lot of tender meat fawning.

Supper club host and private caterer Ian (aka The Candlestick Maker) waved the red and white flag for Old Blighty with a striking and architectural dessert that had the room cooing with glee. Spiced poached pears, chocolate foam and vanilla meringue shards were a coming together of several accomplished components with stellar presentation, and it tasted great too.

The closing plate for the night was a basil gelato with strawberry coulis and pistachios, the product of organiser Rob from The Backdoor Kitchen. Cooling and fragrant, it wrapped the evening up with a pretty bow leaving us to roll down the flight of stairs leading to the street and began our journeys home.

Tickets for the six courses each evening are £35 and can be purchased via the Edible Experiences website where you’ll find further details of the dates and chefs taking part. The dinners are also BYOB. Gather your crew, saunter on over to Hackney, and taste your way around the globe in a single evening.

NB I was invited as a guest to review this event.