I have a lot of love for the new Barrafina in Covent Garden. The sort of love that stems from envy. Envy that places like this are not the norm in this country, but are in ones I don’t live in.

I turned up a bit before opening time at 5pm, gazing longingly through the glass at the bar seating occupied by staff already in their kitchen whites, fuelling up on an early meal before a busy service. I pleaded with them, with palms and cheek pressed against the window, to let me in and let me have some of what they were having (in my mind, of course).

I was eager and hungry, and the anticipation I had for eating their food had been mounting for days. I was really looking forward to it. 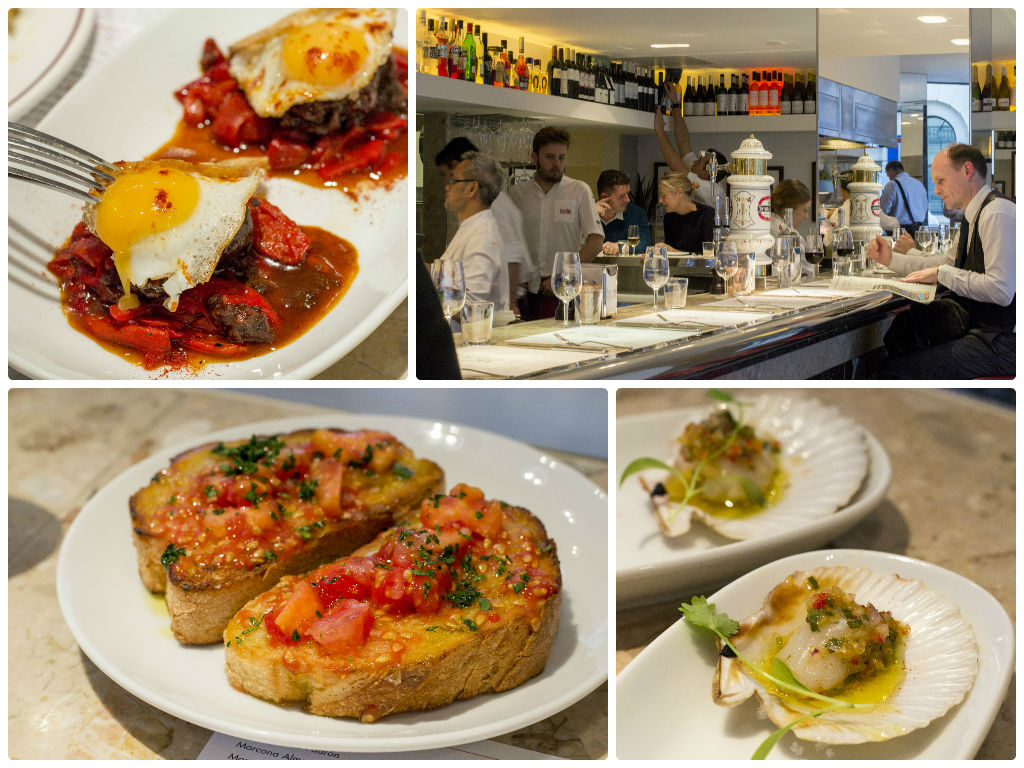 My pal and I walked around a while, returning at what seemed a more acceptable time to embark on an evening meal. Only a marginal improvement at 17.10, but there were already three people seated at the bar and into their first plate of tapas.

We chose our two stools from the twenty-nine, anguished over a menu that is almost impossible to exercise much decision-making over (the additional specials board didn’t help), and were charmed by someone who talked us through the dishes and the wine. Fast forward little more than half an hour and the place was full, with people waiting in the wings for seats to become free by 6pm.

The affection I speak of is for the feel of the place, the atmosphere. The plancha sizzles and smokes and battle cries of whatever the Spanish equivalent of ‘Yes Chef!’ add to the cacophony. There’s a rippling excitement both behind and in front of the counter, from the love of what’s being cooked by the chefs, to the impatience to eat it all by the customers.

It’s exciting, real and palpable, and a pleasure to be in the thick of. But let me tell you – in terms of the food, it didn’t blow me away. And I was expecting it to. 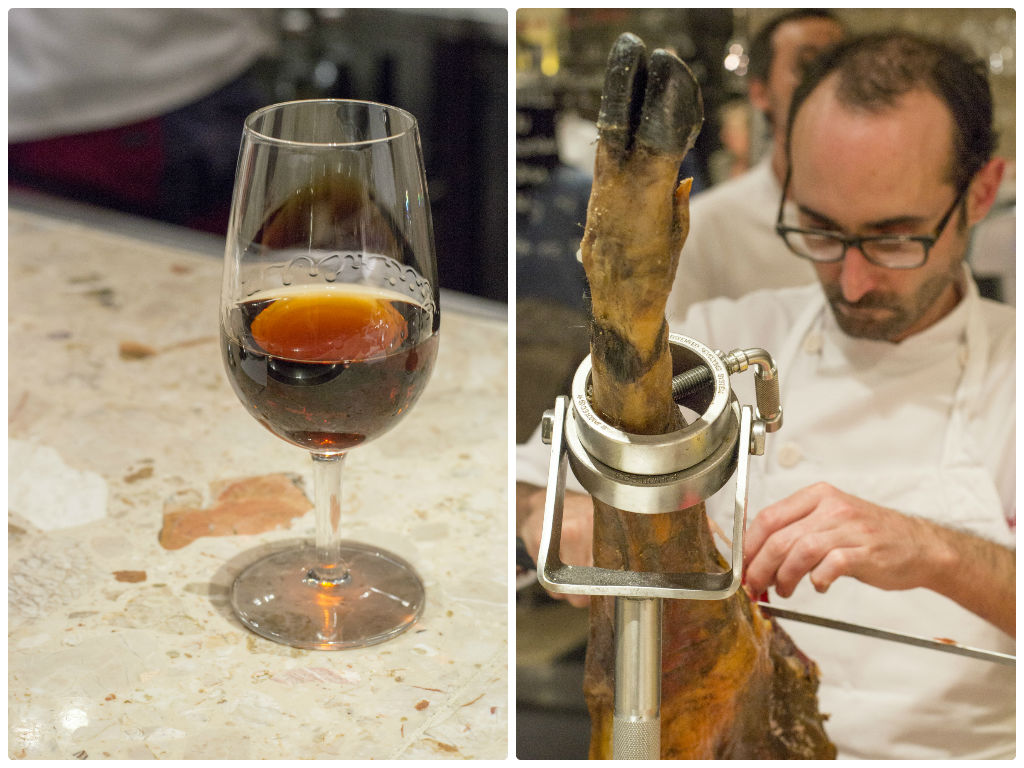 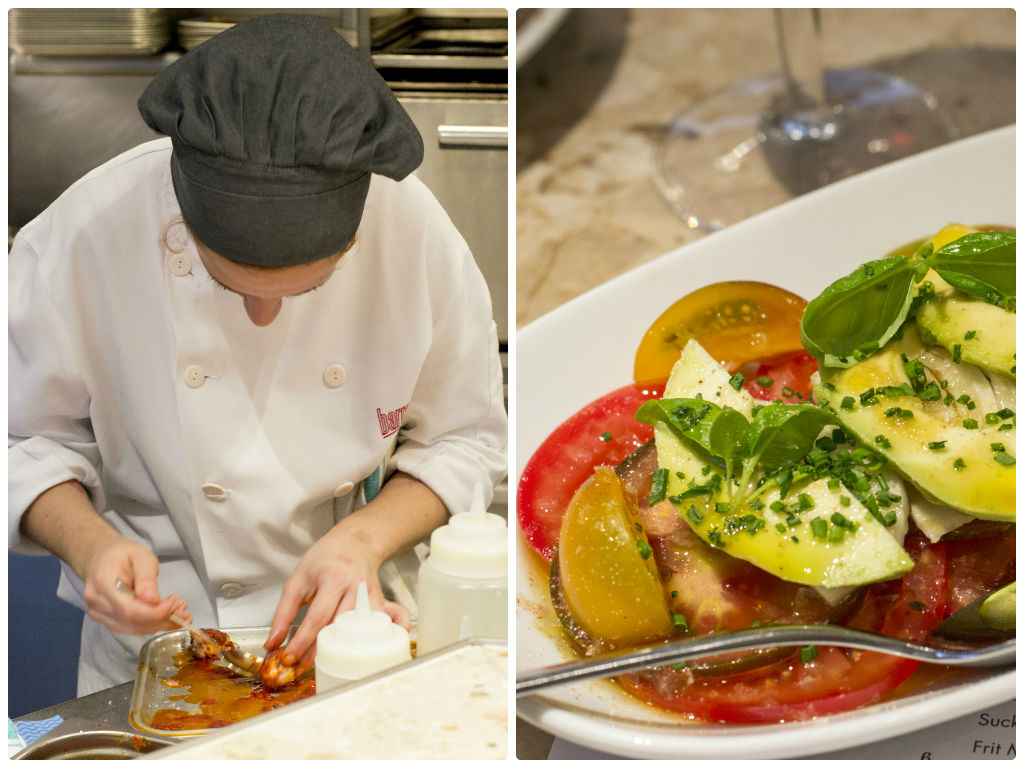 The pal in question is someone who’s lived and worked in different parts of Spain for some time. An ex of hers worked under Ferran Adrià; she knows her benchmark of excellent tapas, and spent most of her free time over there working her way through the best places to eat them. A good person to bring to the latest tapas edition in town that has everyone gushing. She too thought the food was ‘pretty good’, said with a voice of enthusiasm, ‘but it sort of ends there’.

Pan con tomate were fine, chunkier tomato than I’m used to (£2.80 each), but I’ve had better at La Mancha – a humble family-run Spanish restaurant all the way out in Chiswick with no PR fanfare. Pimientos de Padrón were also fine. I prefer more skin blistering, and too many of them were a little too hot for comfort, to the extent that the pal stopped eating them after three (£5).

Fried artichokes with alioli were pretty, brown and crisped up and fun to dunk into the mayo then drop whole into the mouth with head tilted back (£6.80). Suckling pig’s ears, served whole and fried, were fatty and rich and with more alioli (£6.50), but I prefer the cooking method at Duck & Waffle which essentially turn them into Frazzles, and who doesn’t love those.

Prawn and bonito carpaccio could have been a lot lighter and brighter than it was. The quality ingredients were swamped by a pool of oil and citrus (which needed a hell of a lot more astringency), turning what should have been a zippy contrast to all the fatty pork elsewhere, to something heavier than it needed to be (£7). And a plate like that needs bread for mopping; you’ll need to order that extra (£2). But the raw prawns were wonderfully creamy, and the tuna firm and fresh. 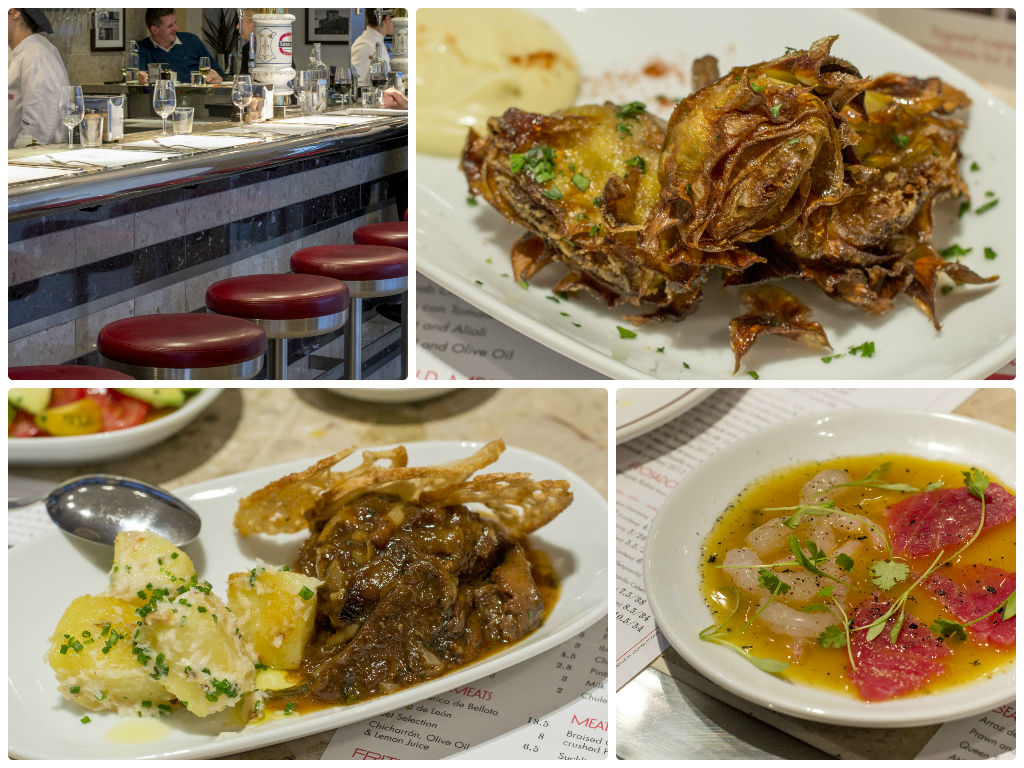 Queen scallop ceviche fared better on the seafood front, zingy and delightful mouthfuls. They really are just mouthfuls though, and conservative ones at that (£3.50 each). Braised ox-tongue with crushed potatoes was another weighty plate. It needed something to lift the meat; perhaps winter greens instead of potato would have helped (£6.80).

We did attempt to pull ourselves out of the meat mire, with a tomato, fennel and avocado salad. It was much needed to help balance everything else, but not especially noticeable on its own merit (£7).

Expect to find choice specials on the board, and to fork out for them. There are whole turbots, whole lobster – the lists are shared twice daily on the @BarrafinaADst twitter account. We indulged in a red “carabinero” prawn that can fetch up to £25 per critter, but on our visit were £16.50 size.

Like I said, ‘a’ carabinero. We shared it between the two of us, however best a large gambas can be shared. After peeling away the shell, there was very little flesh to split (I did get the head though – result). I’d prefer to have a cheaper specimen on offer and get more of it with my meal. What was there was beautiful though, I’d expect nothing less at that price.

Also from the board, expertly fried little quail eggs atop good morcilla Iberica and piquillo peppers. A classic combination that doesn’t fail, and easily replicated at home – once you’ve got the quality sausage. The best dish of the night was an exquisite flan with a coffee mousse, beautifully set, great flavours of vanilla and caramel; it was a positive note on which to close (£6.50). 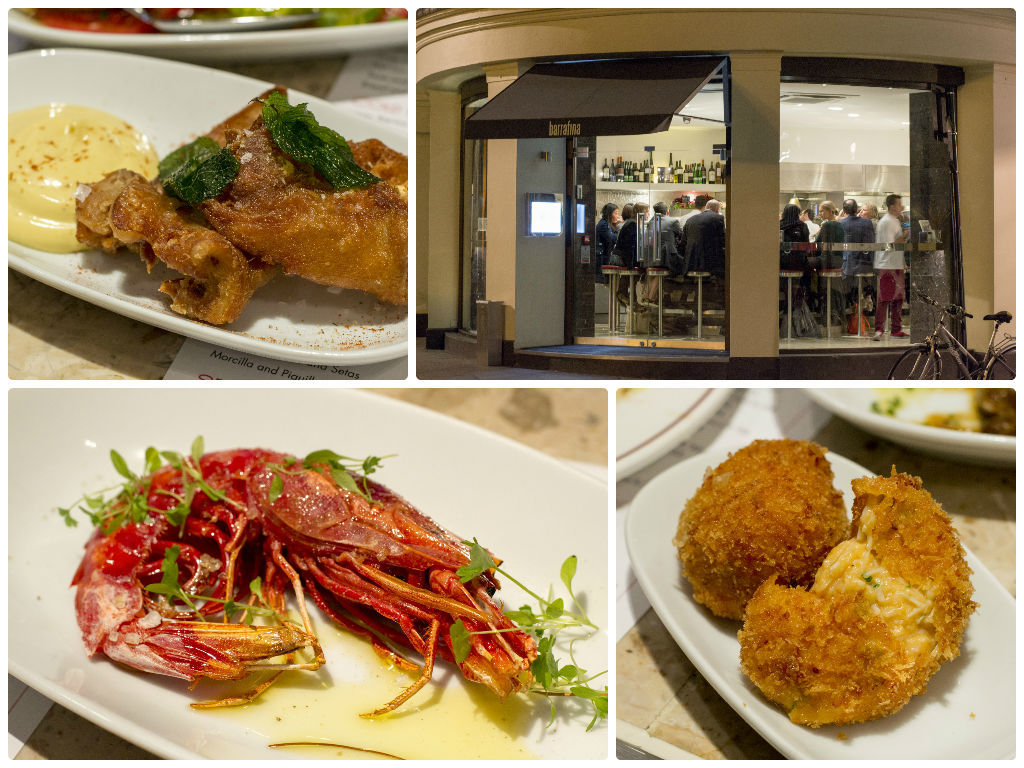 I remembered towards the end of the meal –  before the flan but in the full aftermath of too many rich meats and not enough vegetables – that the crab croquettes had people singing their praises. So we got some – more cloying richness – and they were good (£4.50 for two). I’m sure I would have enjoyed them more if I’d eaten them earlier, but regardless, they were no match to the sensational ham croquettes at Fino.

And that’s where my summary of the evening comes to its conclusion; whilst I very much enjoyed the meal at Barrafina for the event that it was, I prefer Fino, the first enterprise from the same group.

The idea of eating at a bar is fun and continental and makes us feel more European, but after three hours sitting on a backless stool, the spine gives in and it becomes uncomfortable. Of course, traditional tapas bars are not meant for lingering in for hours. You pop into one, savour a plate or two with a glass of sherry, throw your napkin on the floor, and move onto the next. So that discomfort is our own fault entirely.

But it’s part of the reason I favour Fino; you get the tapas but in a bigger, more comfortable dining environment. That takes reservations. Sure, you miss out on all the action from the ktichen-table that Barrafina’s bar essentially is, but I’m willing to sacrifice that.

More importantly, though, I think the food at Fino is better. I’ve been a number of times, and the simple aioli tortilla, their knock-out crab croquettes and that squid ink risotto never fail to make me swoon. There wasn’t anything here that particularly stood out for me – except the flan. It’s worth noting I haven’t visited the first Barrafina, though, so I can’t compare it with that. 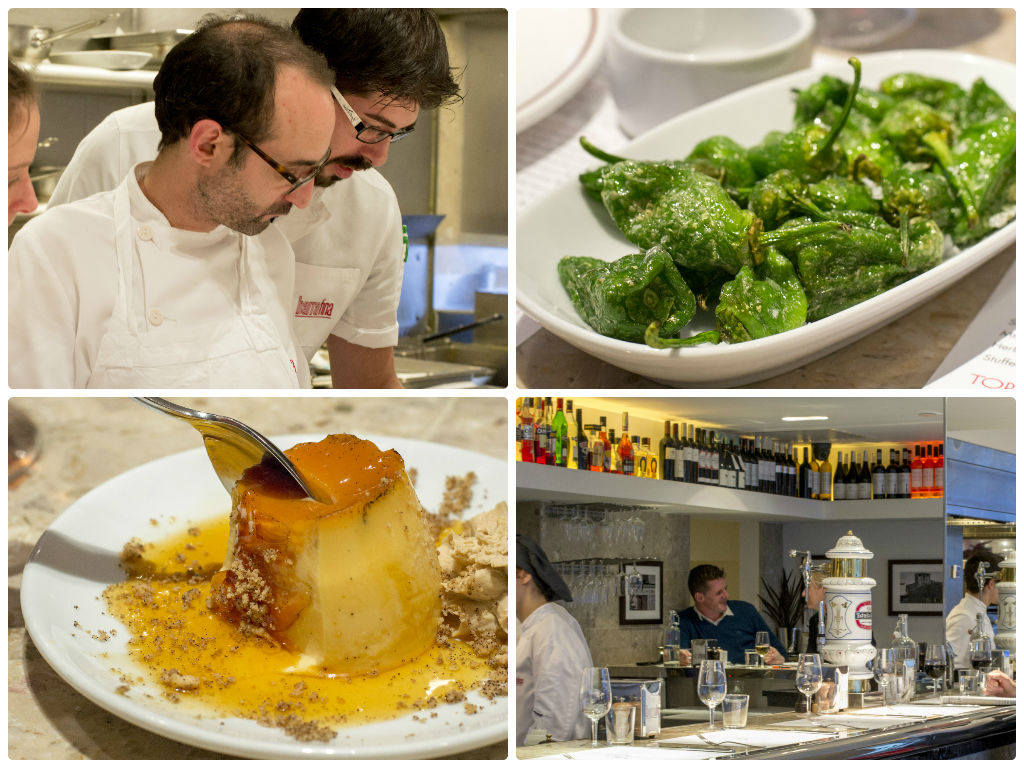 I also need to mention my uncomfortable night’s sleep. I writhed in bed from 2am that night until well into the next day with a serious case of gurgle guts. I wasn’t ill, but my innards were far from right. I’m almost certain this wasn’t due to any fault of the restaurant, but instead our selection of a full range of dense protein and little fibre, that bubbled away in a toxic soup in my gut for most of the next day. The pal experienced a bit of the same.

I’m pretty sure I’d visit again, as there are still a lot of dishes I’d like to try. But I’d probably pop-in for just one or two plates and a glass of wine, and I suspect I’d enjoy it more because of it.

Liked lots: electric atmosphere, wonderful staff, great view into the open kitchen – it’s basically a chef’s table without the matching price tag
Liked less: there’s a lot of rich, heavy dishes on the menu – be careful not to over order on them
Good for: spontaneous and fleeting dining; going solo