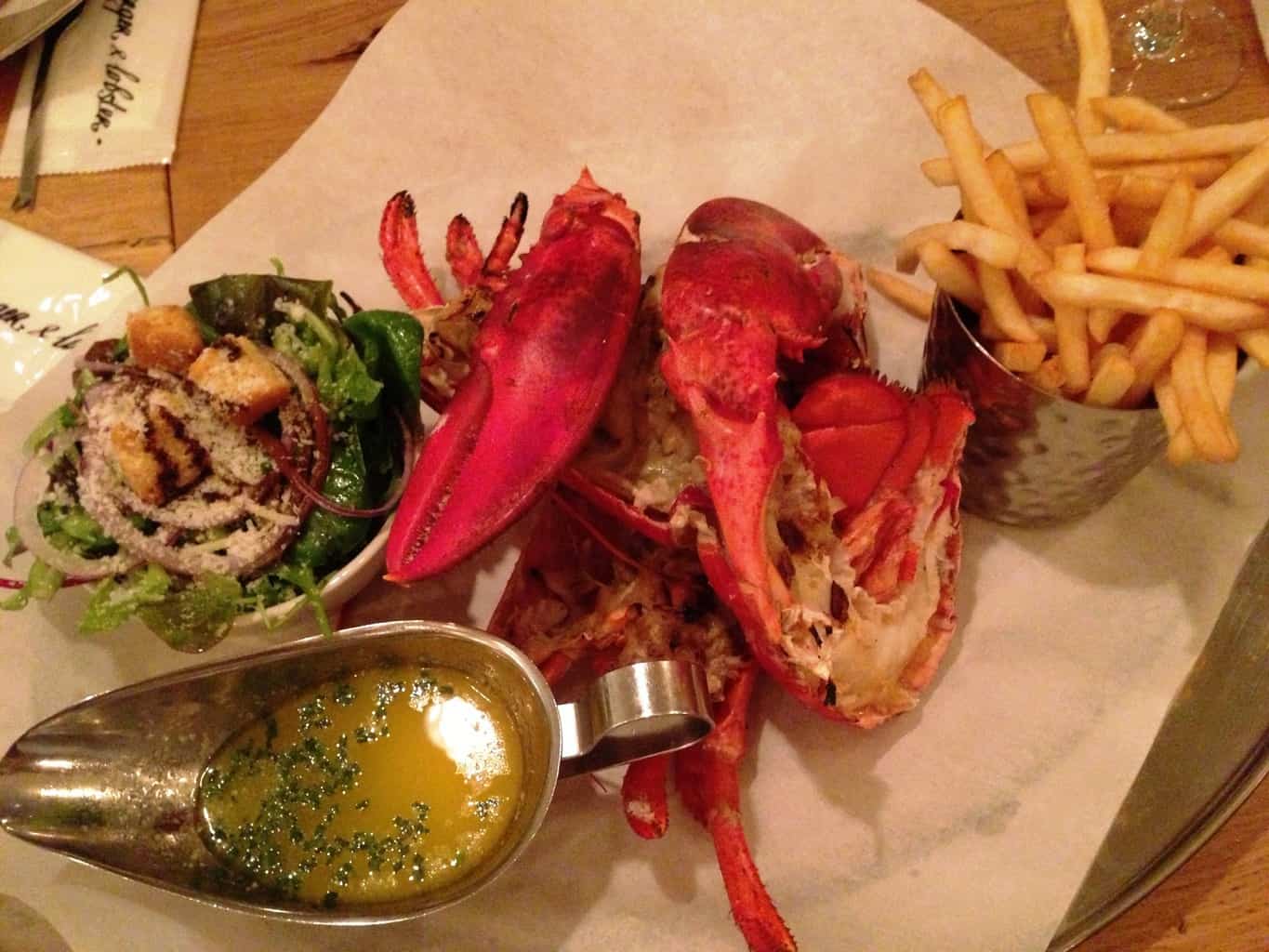 Burger and Lobster, Dean Street – delivers what it says on the tin. It serves burgers (one way), it serves lobster. And nothing in between. The burger is cooked to your preference, comes with lettuce, tomato, red onion, thick cut bacon and a square of processed cheese. The 1.5lb lobsters can come hot, whole and in shell, either only steamed or steamed followed by a lick on the grill. To accompany it, a garlic and lemon butter sauce. Alternatively, you can request the lobster cold and in a brioche bun. All dishes are £20 and all are served with a tin of thin cut fries and a small side salad.

For a menu with just three items on it, a good range of palettes are in fact catered for here. Not many people would turn down a thick juicy burger prior to a night painting the rest of Soho red, or for a brisk bite to eat after a theatre showing. And for those who are after some lighter, posh chow and a photo opportunity, a whole deep pink lobster spread-eagled on a huge oval plate meets the requirements. It’s a venue that has no qualms about its brazen lack of accomodating the vegetarian, and I like that.

My two friends Mel and Reggie accompanied me to dinner, meeting early in order to avoid as much clipboard queue at the door as possible – the restaurant only takes reservations for groups of six or more. We had all arrived by 6.10 but weren’t seated until 6.45. The venue is cavernous, with a single floor of diners and a huge area downstairs where the toilets could be found, and probably the kitchen. The format of the dining area are booths and tables, it’s aiming for high-end fast food and a quick turnaround. The odd lobster tank was visible – I suspect these only for display with the big guns that actually supply the kitchen surely needing to be almost room sized in order to meet the huge demand for crustaceans over the evening. 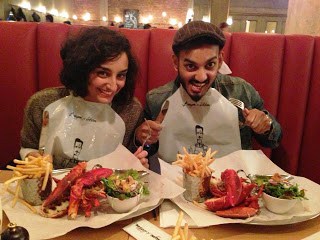 Once seated in the already heaving restaurant, we were greeted by a spritely, American-esque red head who attempted to crack jokes and informed us in her spare time she fenced competitively. She reeled off the three piece menu – there’s nothing on paper as there isn’t really a requirement with such few items. All three of us came for the lobster which at the same price as the burger, is much better value. My two companions ordered them steamed whereas I requested the steamed then grilled option. They arrived within a few minutes, huge and attention seeking, ceremoniously placed on our table before us. Glance over your shoulder or at the table to the side of you, and you’ll see at least one person with a camera or phone taking a picture of themselves and their dining partners raising huge claws towards a cheesy smile, like a sea-dwelling trophy. The concept of this place has unashamedly cashed in the average client’s unquenchable thirst to share every waking moment of their existence with the rest of the globe via social media, and why not. That’s a lot of free advertising. 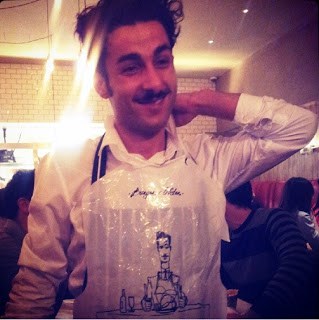 Provided with your meals are disposable plastic bibs with a characteur on the front of what looks to be a stereotyped French waiter with a curled mustachio. While we took the obligatory photograph with these wrapped around our necks, I noticed the waiter that had served our meals was identical to the drawing on the front of bibs. Turns out he’s Sicilian, his name is Michaele and there was a story about his face and the bib somewhere in what he was saying, but his wonderful thick accent and the general noise in the venue prevented me from deciphering it. Not to mention the fact Michaele’s attention was fully directed at Reggie, with Mel and I not even getting a look in. Funny that.

All in all, my lobster was ok. The meat wasn’t as sweet as I would have wanted. The lick of smoke was welcomed, but the thicker parts of the lobster were chewy. My companions said theirs were fully tender, so I put it down to the effects of the grill causing some rigor in the flesh. The butter sauce whilst having hints of garlic, had no evidence of citrus as advertised. Acidity was much needed to cut through everything on the plate and so I had to request some wedges. The crustacean comes with the main parts already separated so you can get on with extracting the meat with the lobster fork provided, but the flesh in some claws were inaccessible and required a lobster cracker. With the waiter pre-occupied with other customers, we all promptly started to bash the claws on the table with the handle end of our knives to create an access point for our lobster forks. Turns out this was a very effective way to grab the attention of the staff – lobster crackers swiftly delivered. 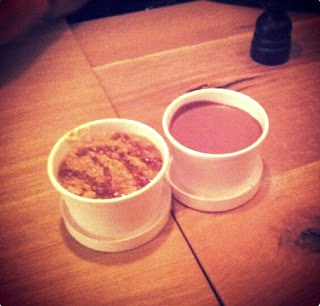 Whilst the plates seem daunting in their size when first presented, the lobsters aren’t that filling. And so there was more than enough room for dessert. Our red-head informed us what was available – a cheesecake or a chocolate mousse with a salted caramel base. One of each were requested and were delivered in small cardboard cartons. The cheesecake was far too sloppy – whilst the flavours were good, the texture of the bulk of it was almost liquid. The chocolate mousse however, with the salted pieces of peanuts covered in caramel, was a sheer delight. Three spoons attacked the latter and I missed out on the last piece because I was too busy talking. What’s new. So we ordered a second mousse and promptly devoured it. The three of us were in the full swing of excellent chat when we were very sweetly, but rather annoyingly asked if we could hurry it up a bit. If a joint is going to serve wine by the bottle, I don’t think it’s fair for them to request you to get a move on when your glasses are still half full – I like to savour my wine.

The staff we encountered were pleasing, particularly Michaele who was quite the fan of my friend Reggie and making eyes at him at every opportunity. He told us next time we come to request to sit in the area he serves so he could spend some time with us – I’d like to do that. I will return – I will try the lobster steamed and request extra lemon in advance. My company was also top notch. Dinner started at 6 with the intention of it being a civilised and early evening – events didn’t quite go according to plan and we ended up in a cocktail joint dancing on the bar on a school night until the wee hours. But that’s probably another story.

Liked lots – staff; atmosphere; novelty of a whole lobster on your plate; location
Liked less – waiting for a table; if you get the burger option the value for money isn’t as good
Good for – groups of friends; being raucous; taking London visitors to