If you’re due to visit Japan, you will notice a lot of things. A lot of fascinating, unfamiliar and sometimes strange things.

Chairs on trains swivel 180 degrees so as to always face the direction of travel. The doors to taxis close automatically. You can smoke inside many restaurants, but only in designated areas on the street. Toilets are more advanced than the International Space Station, with buttons for things you didn’t even realise were desirable toilet features, and there is absolutely and equivocally no tipping in Japan.

People openly read violent manga pornography in public, often involving giant tentacles, and no one will bat an eyelid. Shop and restaurant staff will shout the “Irrashimase!” welcome when you enter their premises. It’s acceptable to get obliterated on a Friday night, puke up on your boss’s shoes, pass out on street corner, and turn up for work on Monday morning with no judgement passed. But it’s frowned upon to be seen eating while you walk.

Oh yes, and bathing is traditionally done in communal baths, in the complete buff. 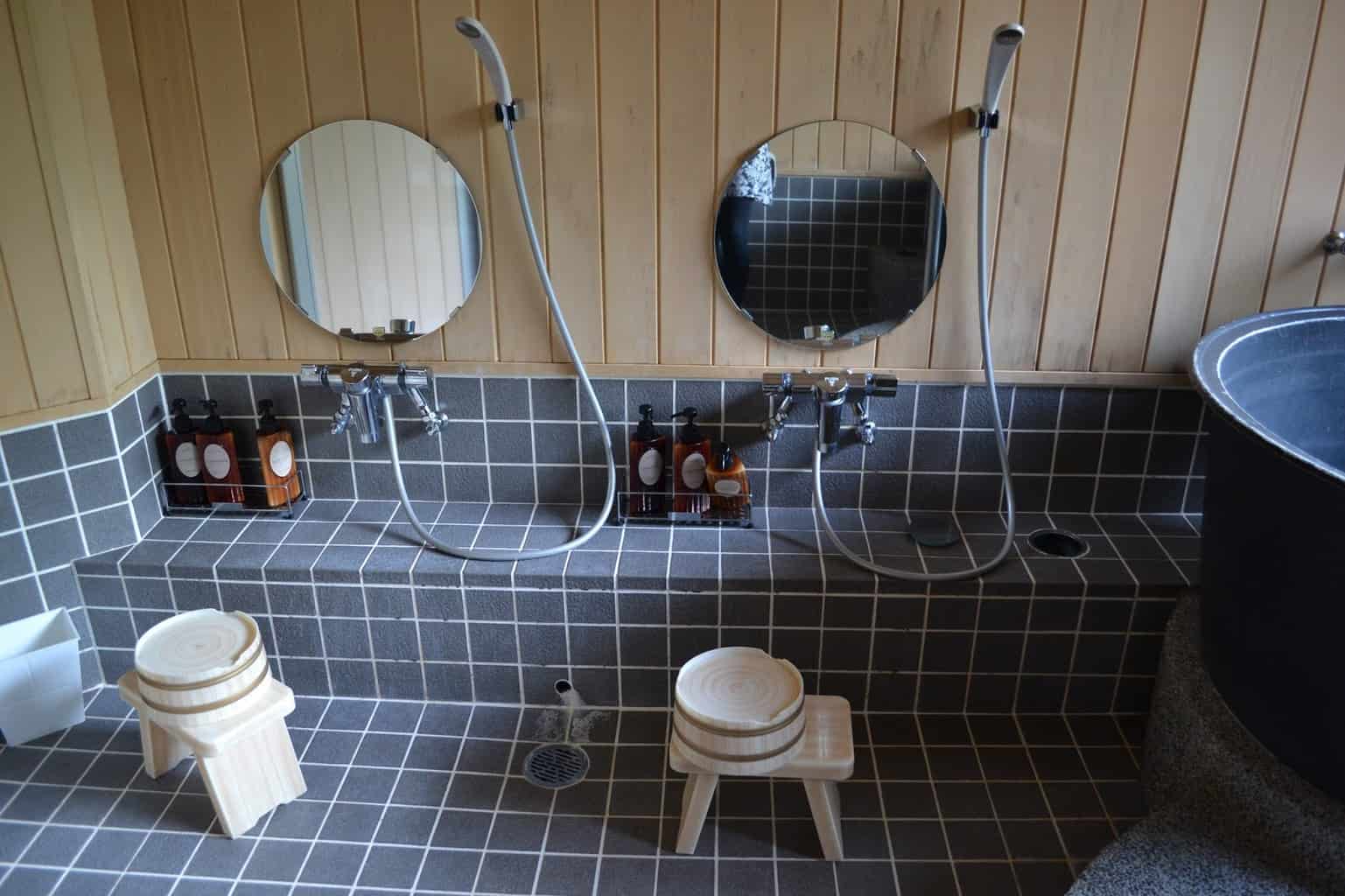 It’s a fascinating quirk of the isolated evolution of the Japanese culture, when you think about it. Outside on the street, you’ll be hard pressed to engage in much eye contact thanks to the mostly coy demeanour of the Japanese. But bump into that person in the onsen of your hotel room and they’ll happily strip off and sit in a bath with you.

The Japanese tradition of bathing with others in your birthday suit often causes a state of alarm for westerners. Particularly for the British, with our stiff upper lips and aversion to nakedness in general. Most of us can just about handle a doctor asking us to drop our pants for the sake of our wellbeing. I myself am that person that will hide my modesties behind a precarious towel wrap as I try to shuffle on some underwear in public changing rooms.

But let me tell you, when it comes to being in Japan and embracing their culture, my advice is to leave your anxieties and insecurities about this arrangement at the arrival gate. Because doing so may well be one of the most liberating and fun things you do during your trip.

Here’s a little guide to help you get Japanese bathing right, and enjoy it.

1) What’s the history behind the onsen? 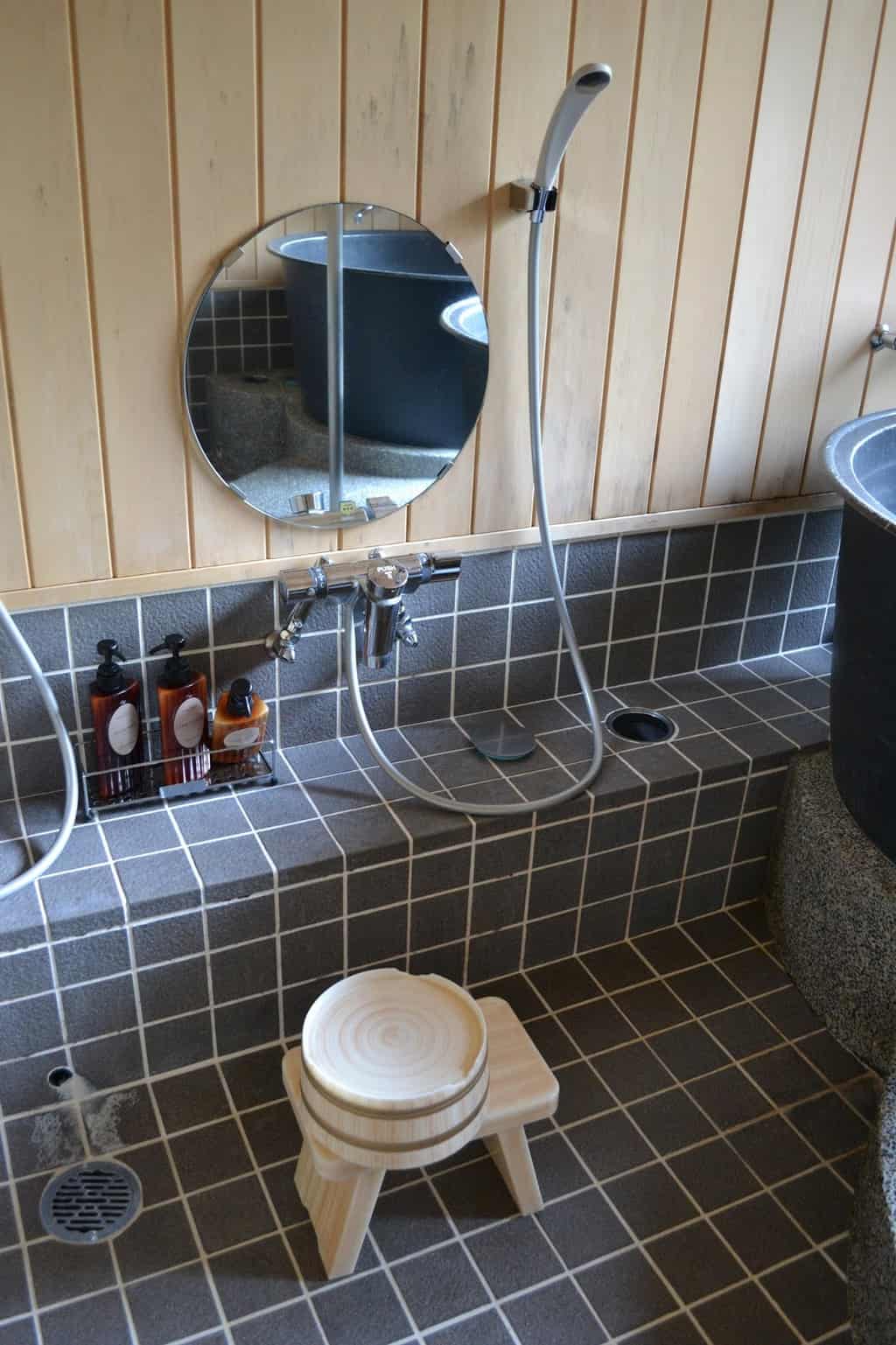 The word onsen is in fact a term for geothermally heated hot springs, although it’s often used to describe the bathing facilities and inns situated around them. Thanks to its volcanic activity, Japan has a lot of these scattered along the length and breadth of the country, and they are used as public bathing spaces.

Traditionally they were located outdoors, but a large number of properties have harnessed these waters and brought them inside to provide the facilities under cover. They are believed to have healing properties, thanks to the multitude of minerals that can be found in them.

2) Why is bathing in them such a popular pastime?

As well as all those minerals, the purpose of wallowing in these warm waters is to provide an escape from the stresses and strains of everyday life and embrace the virtues of hadaka no tsukiai (naked communion). It allows people to get to know eachother in an environment where there can be no barriers.

While finding yourself naked in front of your boss is the stuff most nightmares are made of, it’s not uncommon for company groups to visit onsens en masse, as well as friends, and families.

In the past, men and women bathed together and everyone was fine with it. But since Japan opened its doors to the west, gender separation has been enforced and is strictly adhered to. The traditional mixed bathing does still persist in some rural parts of the country, however.

The sequence of events to enjoy an onsen is as follows:

Firstly, only your own sex. Onsen baths and changing rooms are single sex. But in all honesty, likely very few people if anyone will see you naked. No one is there to look at anyone else, and everyone keeps themselves to themselves.

Also, if you use the washcloth (which when fully unfolded will be a decent size) to cover your bits as you walk about, it’s likely no one will catch a glimpse of anything. And once you’re in the water, nothing is visible anyway.

No, you can’t. Swimming costumes are strictly forbidden as they are seen to contaminate the water. If you walked in with a swimming costume, everyone would stare at you as it’s just not permitted. I’ve heard of the odd place allowing costumes where they permit both sexes to use the same onsen. But these are usually more water-park themed and uncommon.

6) I’d like to experience it with my partner, is this possible?

If you’re of different sexes, the short answer is likely no. You will both need to visit your respective onsens separately, unless it’s those theme park type ones I mentioned above.

There are some places that might allow the onsen to be locked and enjoyed privately, and in this case both sexes could enjoy it at once. For example, Hotel Mizuhasou on the island of Miyajima had a couple of onsen rooms with two showers and two tubs in each (pictured), and a lock on the doors to allow this. The only problem here is queues would form outside, waiting for you to finish, which is far from relaxing.

7) What if I don’t want to shower in the onsen, will my room still have a bathroom?

Some very traditional ryokans won’t have any private bathrooms available and will only have an onsen to get yourself clean in. This was the case with the hotel mentioned above. Don’t be put off by this set up. If you just want a quick shower without the soaking, it’s very easy to pop in, have a wash and leave without barely being noticed at all. Like I said, no one is looking anyway. 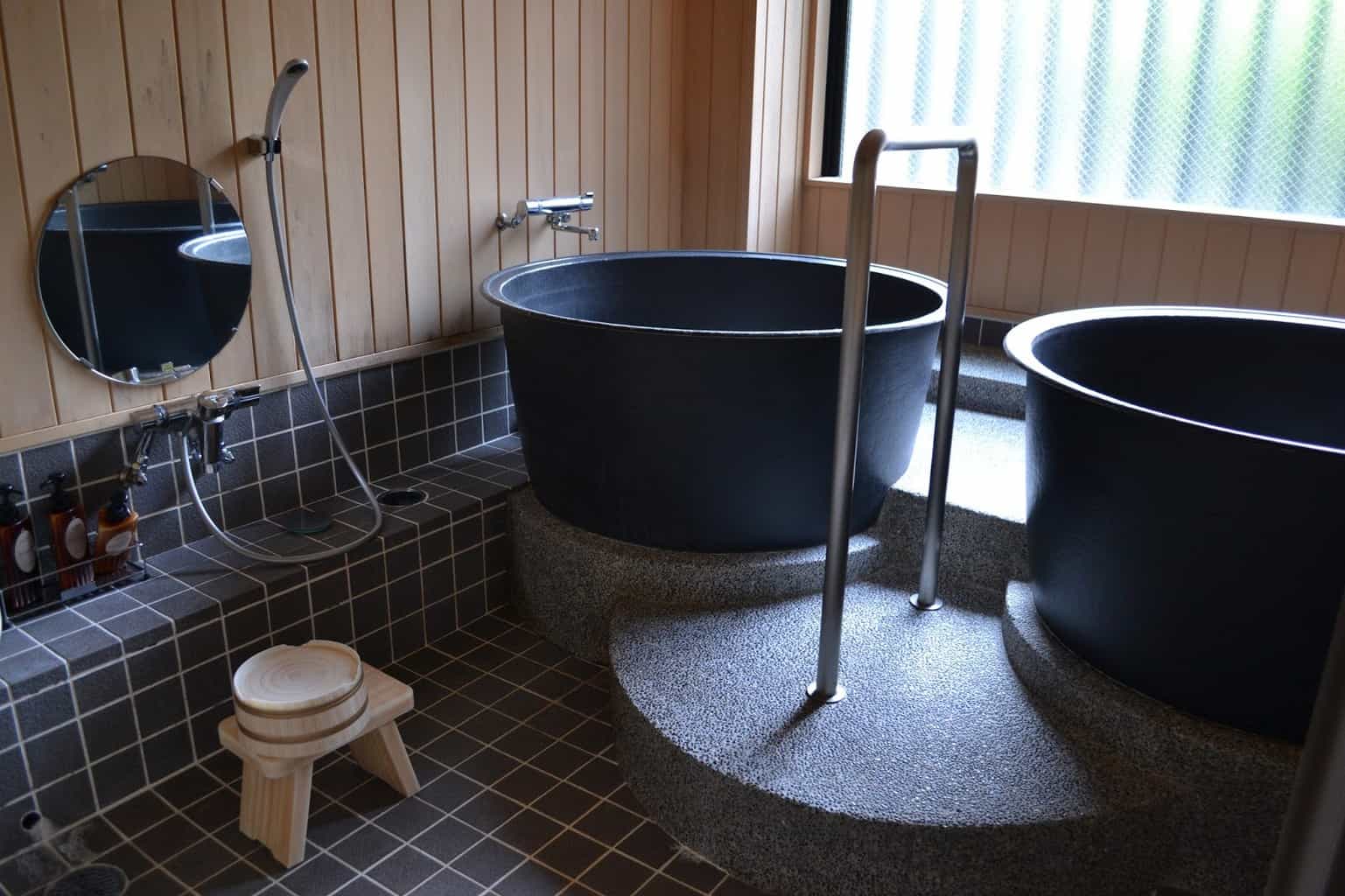 8) What should I expect when I go in?

Based on my own experience, a glaring observation I made was the lack of westerners in the hotel onsens. I suspect many get put off by the idea, which is a great shame. Don’t be surprised to see people really going for it at the shower stage, getting into every nook and cranny. The Japanese take down their toothbrushes and even their razors.

9) Are there particular times of day where the onsens are less busy?

If you’re really conscious about the naked part and want to minimise the number of people who might see you, certain times of day are more quiet than others. Mornings either before or after breakfast, and evenings before or after dinner will busy – basically the times of day it’s most common to have a shower. I suspect the middle of the day will be the most quiet.

Onsens tend to have opening and closing times, they won’t be open 24 hours a day. In addition, some places might only have one onsen that alternates between male and female use for a certain number of hours each during the day. So check the times first and figure out when you might want to go.

10) What sort of people use the onsens?

Everyone. There were mothers with babies. Old ladies. Young women. People on their own or with a friend. My partner reported the same – business men, young men, elderly gentlemen, dads with sons. All shapes and sizes, all ages, all completely at ease with the whole situation. It’s a fantastic environment to be in.

This can vary considerably. For example, Hotel Associa in Takayama had a spectacular open air but covered onsen area, on multiple floors, overlooking the mountains. There were many shower stations and a number of pools to dip into, each with different temperatures, as well as waterfalls and jacuzzi tubs. There was a huge amount of space which made it very easy to find your own corner away from everyone else.

At the other end of the scale, an onsen may consist of a small room with just a handful of shower stations and one or two small tubs. This may initially feel awkward, but again, no one is looking at you and anyone else there has the same agenda as you – to just relax. If it is only the two of you in a tub, just go with it. It will be fine.

Anymore than two in a small tub and it might be a little too close for comfort. What usually happens in this situation is whoever has been in the longest will kindly bow out of the scene once a new person has entered and showered, to allow them to take a dip in their place.

12) I want to take pictures in the onsen, can I take a camera in?

Err.. no. I’m not sure that would go down too well with all the naked people that would be in your shots. The pictures I’ve used in this post were taken in the lockable onsen, and before it was open anyway.

We sometimes forget it’s possible to enjoy an experience without having to take a picture of it and post it online. This is a perfect opportunity to reacquaint yourself with this ancient notion.

13) Any tips for enjoying the experience?

Do take a bottle of water down with you. Onsens can be quite hot and it’s probably easy to overheat. When you get out you’ll need a cool drink, some places will have a water cooler.

If there are certain shower gels and shampoos that you use, it’s fine to take these down and leave them on the side once you’ve showered, while you take a dip in the waters.

Otherwise, there’s really nothing else to it.

I hope this guide has helped dispel any qualms you may have about the traditional Japanese bathing experience. If you’re due to visit this spectacular country, I highly recommend kicking off your knickers and getting involved – I bet you’ll leave feeling rejuvenated in both body and soul.

Check out www.japan-experience.com for all your Japan travel related needs, from rail passes and car rental, to hotel booking and tours.