In the heart of Tooting in South West London, amongst the throngs of great Indian and Pakistani restaurants and market stalls, nestled in the bosom of a thriving and buzzing Indian sub-continent population, you can find a little nugget of London’s English culinary history.

For on Selkirk Road stands the same establishment that has stood for the past 105 years and all the time remained in the hands of the same family – Harrington’s Pie & Mash shop. 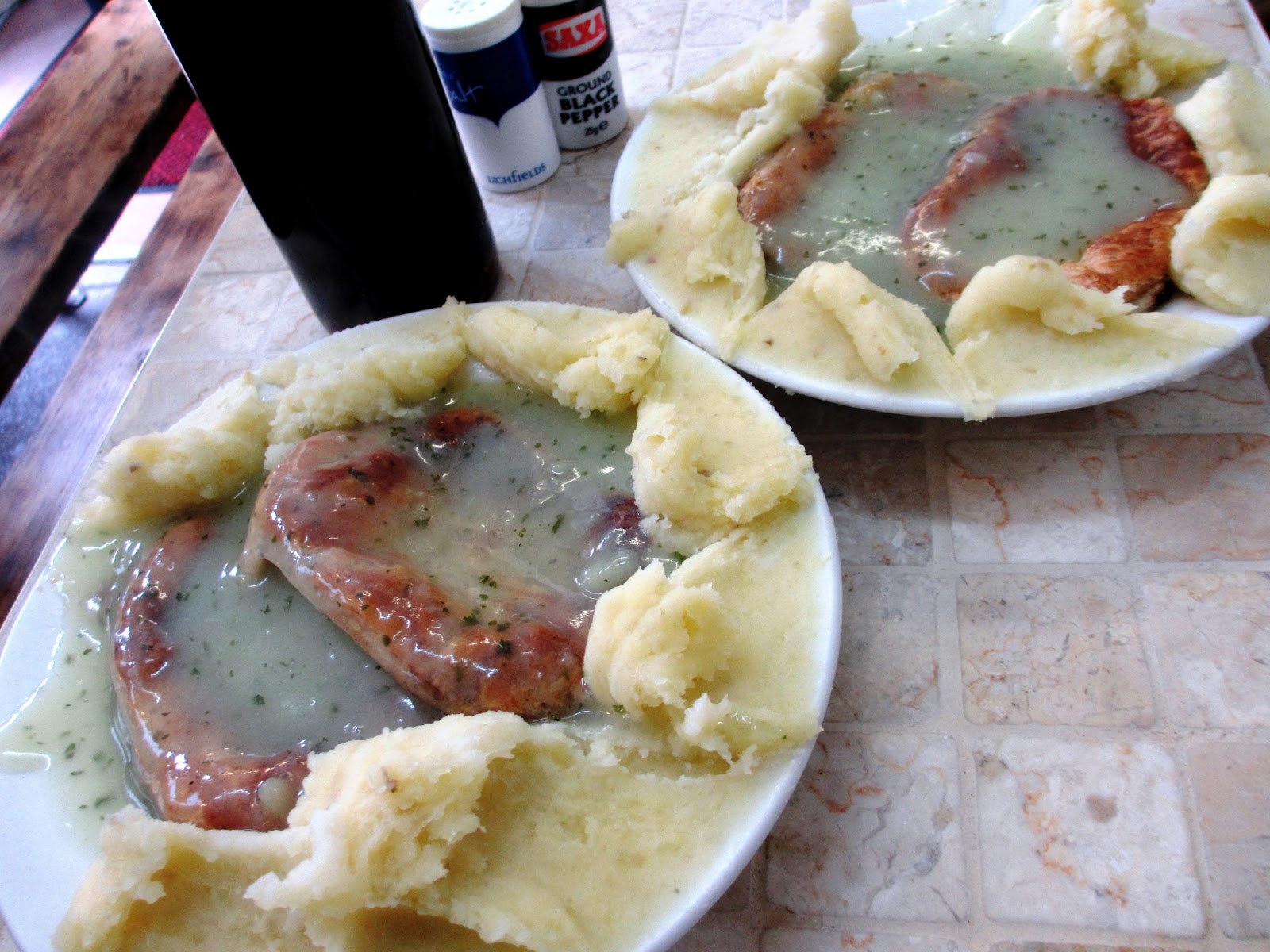 As London’s pie and mash shops go, they’re a dying breed. Once the staple diet for the
cockney geezer, these days they face lofty competition from the latest pop-up, new
and exciting cuisines, and places that serve your drink on fire in a jam jar
with a fig roll – it’s a tough old market for an establishment where both the
interiors and menu have changed little in over a century.

But there’s a lot of
love for this place and for the other remaining pie and mash shops in London –
the loyalty from customers who once visited with their grandparents, now
grandparents themselves, gives Harrington’s a special place in people’s hearts.
I suspect many of their customers would sooner keel over before eating anywhere else – there’s
a lot to be said for that. 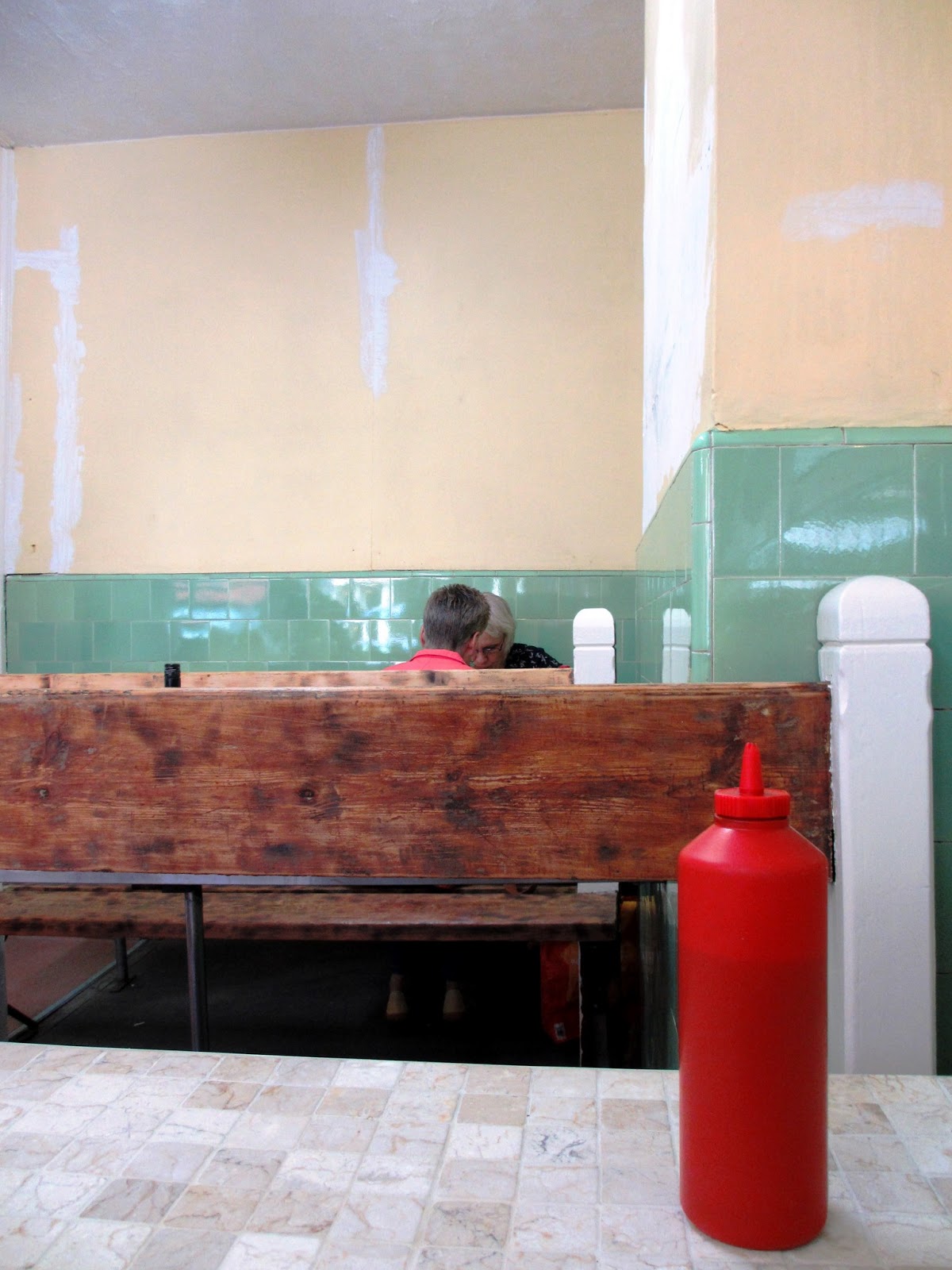 The format is as
such – you order your pies (£1.50 each). One, perhaps a couple – they’re not
huge. To accompany this is a standard side of mashed potato (£1.00), scooped up
with a spatula and arranged on the rim of your bowl. And for lubrication, a
portion of liquor (50p) – otherwise known as parsley sauce. If you’re feeling
adventurous, why not sample the jellied eels.

Whilst it wasn’t the prettiest
plate I’ve ever been served, I’ll tell you what, it wasn’t half tasty.

Home made pies are churned out from the back throughout the trading hours,
delivered to the front bar in the pie trays they were cooked in and piping hot.
Filled with ground mince beef and gravy, they’re fresh and tasty. The mash was
a little dry for my palette, but the parsley sauce helped loosen it up. Notice
the gelatinous consistency of the liquor – it’s traditionally made from the
water the eels are stewed in. Embrace it.

Harrington’s is a
bit like an old dear – sure the tiles are cracked, the paint is peeling and the
vinegar is served in old wine bottles with pierced screw tops. But the heart of
it is still beating strong and stands steadfast as a pillar in the community,
serving up tasty home made pies at low prices, feeding generations that span decades.

While we were seated at around 5pm on a Sunday, a queue began to form
leading out the front door – families ordering take-out for their tea at home;
an old lady ordering what seemed to be a week’s worth of pies with jugs of liquor
decanted into Tupperwear; a very fragile couple sitting and eating in a comfortable
silence familiar to those who have been together for decades – I like to think they’ve come
here every week since they were childhood sweethearts. The lady behind the
counter knows almost everyone’s name and engages with the regulars – people feel
comfortable and at ease here. 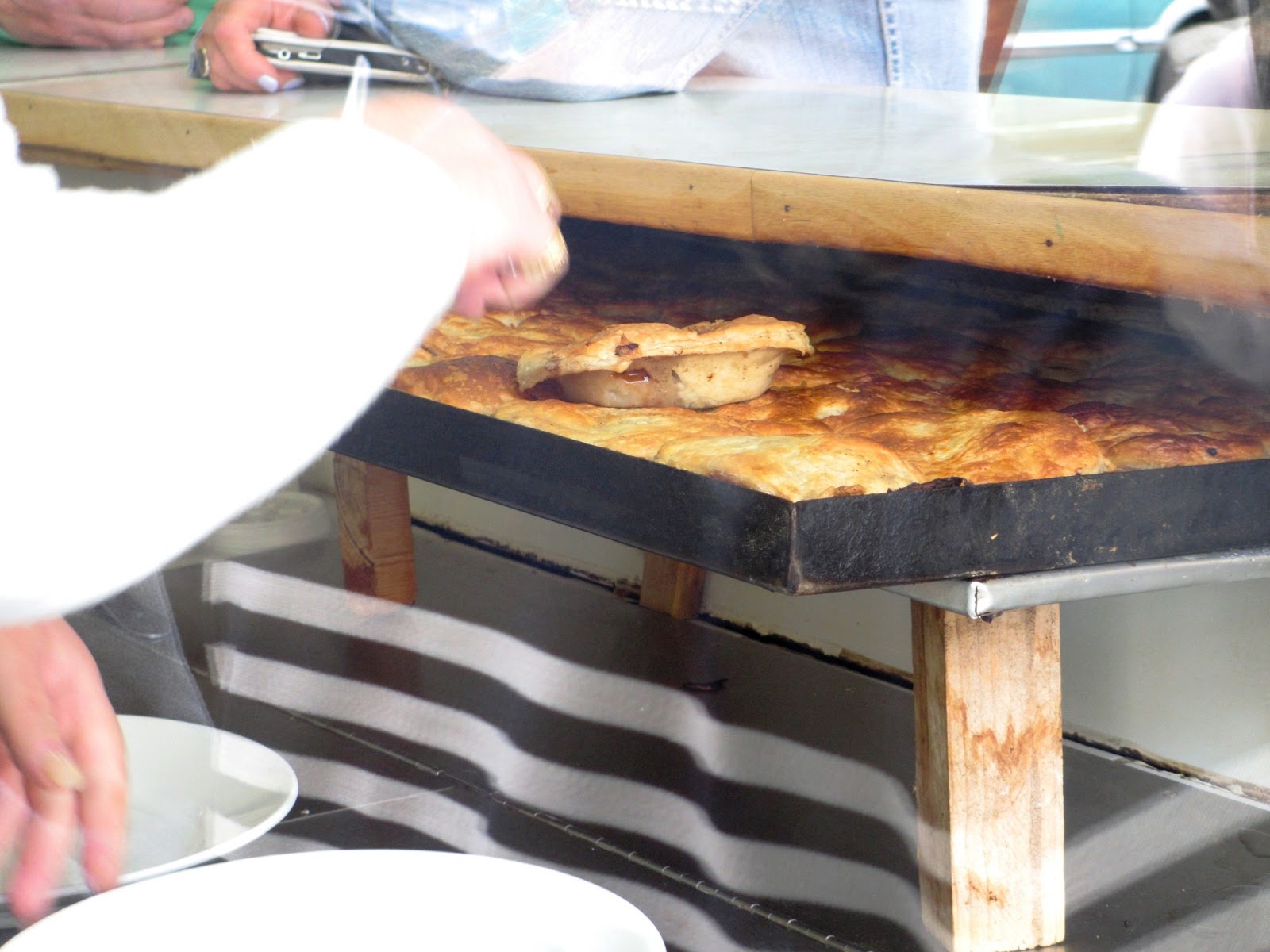 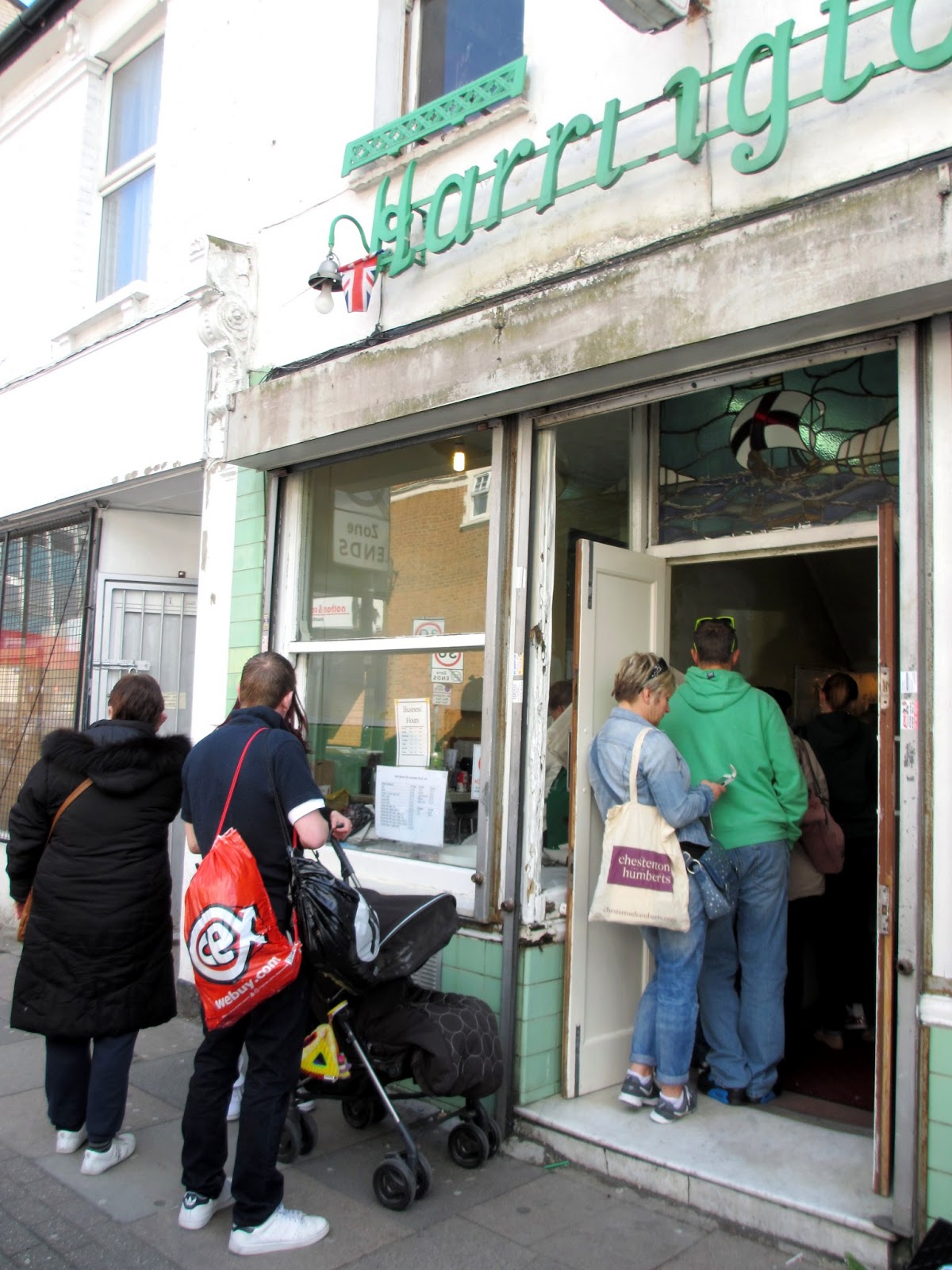 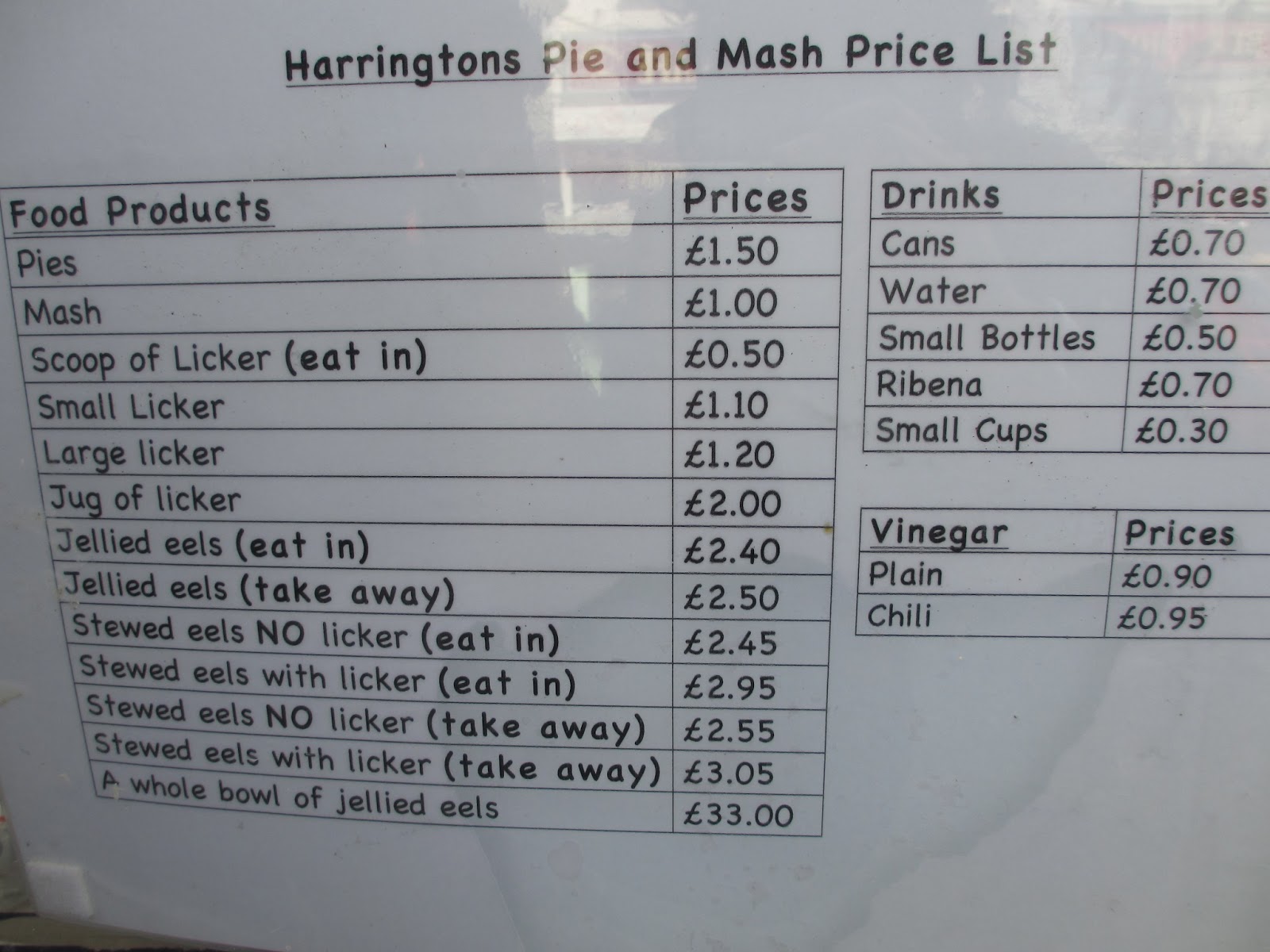 If you want a
chance to live out any East End cockney fantasies and visit a slice of history frozen in time, don your flat cap and make your
way to Harrington’s for a taste of London’s past that hasn’t changed in for ever,
and probably never will.