“An Iranian and a part-Turk walk into a Levantine-inspired bar (and restaurant)”. Remarkably, not the opening to a joke with potential to offend, but an innocuous intro to an evening at recently launched Arabica Bar & Kitchen in the thick of Borough Market.

For me to delay a visit to a newly opened Middle Eastern restaurant for much longer than it takes to glance over the online menu, would mean committing nothing less than sacrilege. And so – on only their second day of trade (after a soft-launch period) – I arrive in the heat of the evening expectant and hungry and with a Persian in tow for good measure. 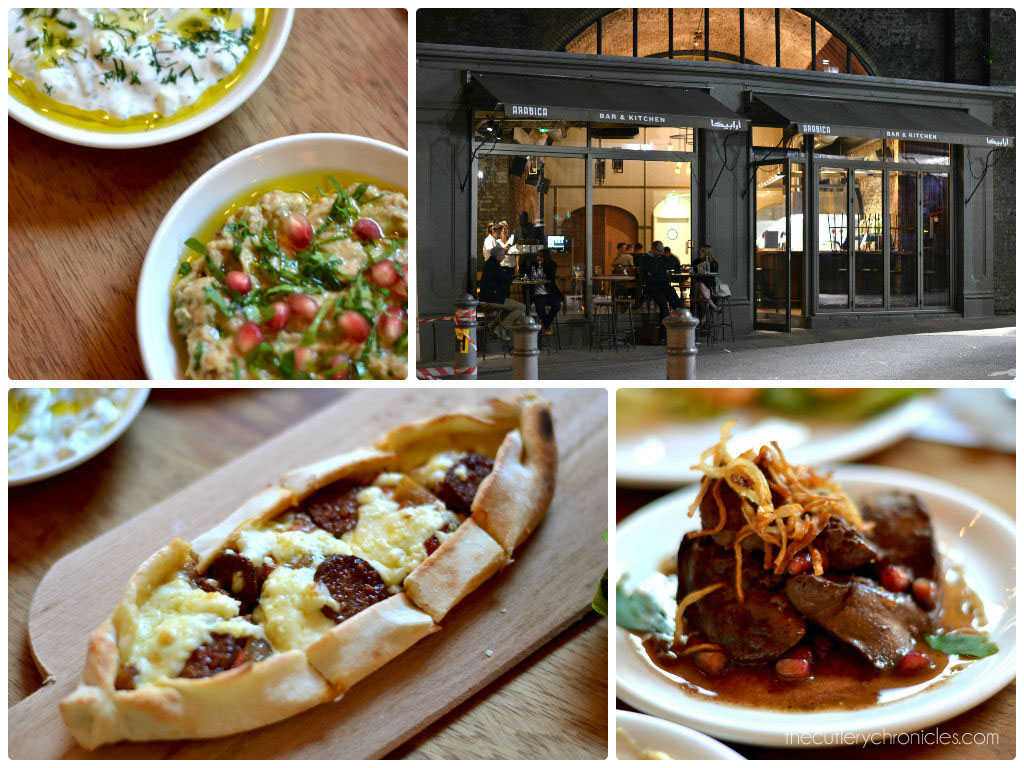 The Arabica brand began life on this very ground over 14 years ago, selling a modest range of home-cooked mezze wares amongst what was then just a handful of other merchants. Since then, it has expanded into trading at several London market locations, grown an impressive online offering and boasts a Selfridges concession.

The opening of Arabica Bar & Kitchen – with its splendid high arched ceiling and bare bricks – sees the brand come of age. It has blossomed into a devilishly handsome and confident young buck that feeds people great food and flirts with wild abandon from the menu. There are exposed steel ducts and mirrors to widen the space; there’s a long bar, booths and tables with those on-trend (but somewhat uncomfortable) classroom-style chairs, and full-length bi-folding doors to let in the sultry night.

The clientele is an eclectic mix; from straight-from-the-office types who – in spirit – clocked out shortly after lunch, to those free from the shackles of 9-5 LED strip lighting, sporting burnt calves and rosy cheeks from a day lolling about in London’s sunshine. The atmosphere is entirely at ease, whilst still sophisticated enough to impress a date or play host to a few suits.

The menu is portioned off into manageable chunks – dips, raw / cured, fried, clay oven, stove / grill / charcoal, salads, veg / rice / pulses – each offering a handful of choices. Whoever devised it is a clever sod, because the format dictates what feels like natural logic – these are all small sharing plates, so we’ll choose one from each group. Be warned, doing so can unwittingly tot up the bill and result in a spread in excess of what is reasonable for two people to consume. Or in our case, a mere nod of acknowledgement from Gluttony.

We of course, cleared the lot. 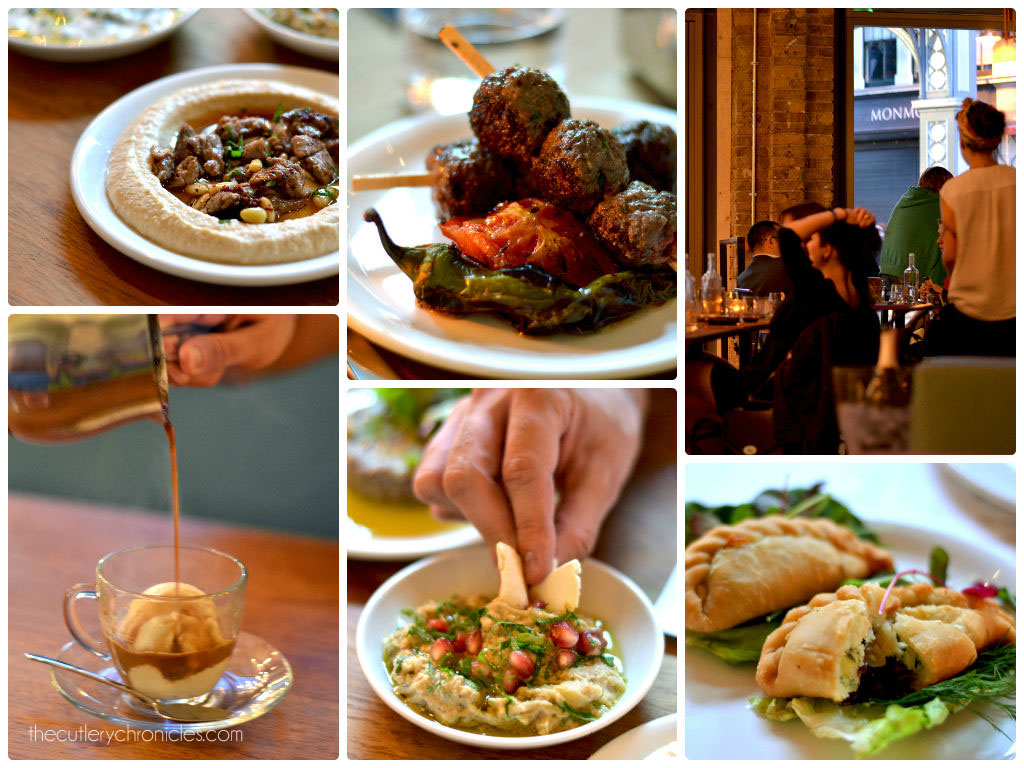 And the lot we got was very good indeed. Let me begin with the Lebanese lamb and beef tartare, and the fact that it was just about the best I’ve encountered. A fabulous grainy texture from the presence of bulgur wheat, hand-chopped meat, expertly seasoned, with herbs and onion and great olive oil – so easy to eat. I could sit in front of a film with a bucket of this and a wooden paddle and reach the bottom within six minutes (£9.50)

The texture of a well-cooked chicken liver is up there with the best the food world has to offer; the ones here were velvety and tickled by the sweetness from sticky pomegranate molasses, dressed with jewels from the fruit and a flourish of crisped onion slithers (£6.50).

A moat of glossy whipped-up hummus (with ghee!) surrounded a chunky island of tender lamb fillet and toasted pine nuts (£6.50). The cacik (pronounced juh-jook) – strained yoghurt with garlic, cucumber, lemon, olive oil, mint and dill – was better than my dad’s (£5.50), and the moutabel – smoked aubergine with tahini and bejeweled with pomegranate seeds – managed to beat the other two in the which-dip-can’t-we-leave-alone game (£6).

Levantine pastries of akawi cheese, nigella seeds and parsley were good, if a little heavy. I prefer the thinner filo used in böreks, probably because they’re what I’m used to. The advice to wrap them in the lettuce leaves and fresh herbs they were served with did lift them, however (£6).

King prawns with peppers, garlic and the sweet smokiness of Turkish urfa chilli were very pleasant (£9). Then there was the pide (pronounced pi-deh) boat – an oval vessel of pillowy-rimmed bread transporting spicy beef sausage, barbecued red pepper sauce and yielding hot halloumi to our mouths (£7). 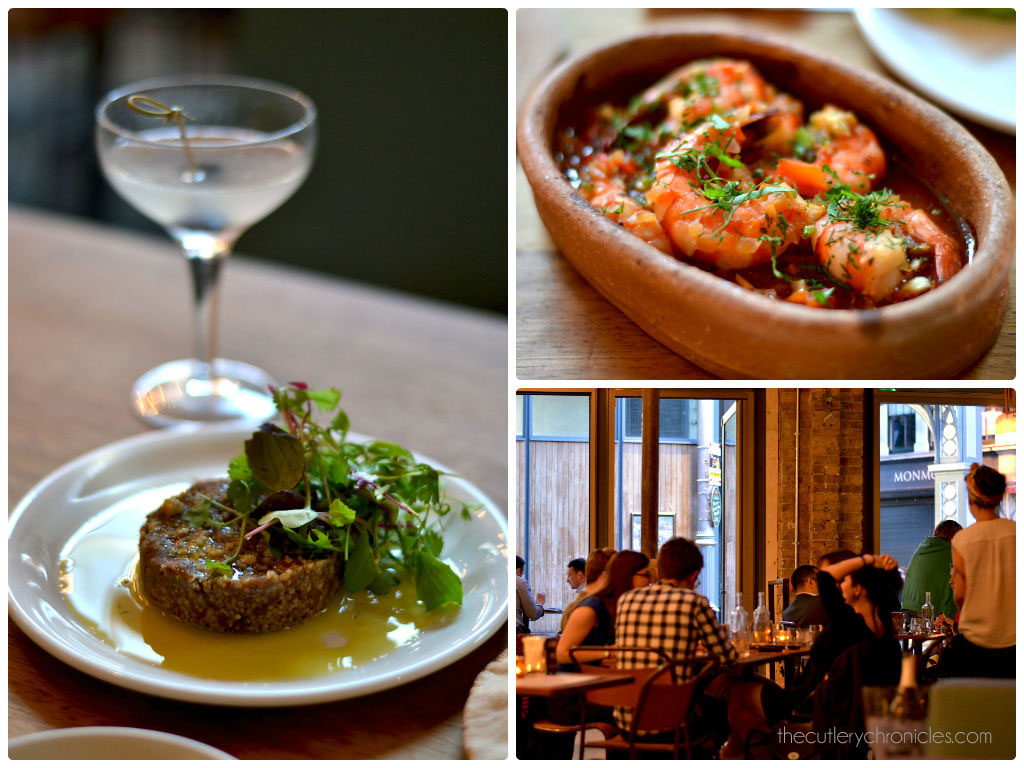 Then there were beef and bone marrow koftas with a defiant love-it-or-get-the-hell-out promise of “served rare” on the menu. My dining partner applauded the fearlessness; “Order meat in Edgware Road and they’ll cremate it because of their religious beliefs. Persians are not Arabs – we like our meat rare! I’m so bloody pleased it’s pink.” Tight little balls of savoury and succulent sensation – very good (£9.50).

Our banquet closed with knafeh – a slab of shredded filo pastry cooked in butter and soaked in syrup, encasing a treasure of cheese at the centre. I’d prefer the cheese a touch more salty, and it needed more butter or syrup as filaments of pastry were catching in the Iranian’s throat and was a little dry on my tongue (£7 – I had a glorious one in Istanbul once). Then there was a Turkish coffee (with warming undercurrents of cardamom) affogato over halva ice cream which I thought was very clever (£5.50).

This place makes people happy through that age-old winning combination of warm hospitality and very good food. The entirety of the remaining menu are things I want to eat more than three times and so I suspect this place will become a regular.

My final words: chef James (who you’ll find in the kitchen) has lovingly recalled and transcribed the Arabica journey from its conception to the present day. It’s a great story, he tells it well, and it will make you appreciate the passion from the kitchen even more – do have a read.

Liked lots: a great looking menu, that tartare, dips, kofta, cocktails, design, atmosphere, staff, a spot on wine list devised by wine man of the moment Zeren Wilson – we enjoyed a very agreeable bottle of Grenace-Cinsault 2012 rosé
Liked less: I’d like to see more bread options – the land of the Levant is so good at bread – not showcasing them here feels like a missed opportunity. Portion sizes can feel a little conservative for the amount paid – specifically with the dips. But then they were very good, so..
Good for: exciting Middle Eastern food that isn’t stuck in the tired old ways of Edgware Road, and superior to the Wahaca equivalent that is Yalla-Yalla.